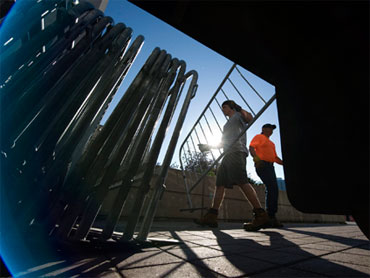 Canada thinks it can teach the world a thing or two about dodging financial meltdowns.

The 20 world leaders at an economic summit in Toronto next weekend will find themselves in a country that has avoided a banking crisis where others have floundered, and whose economy grew at a 6.1 percent annual rate in the first three months of this year. The housing market is hot and three-quarters of the 400,000 jobs lost during the recession have been recovered.

World leaders have noticed: President Obama says the U.S. should take note of Canada's banking system, and Britain's Treasury chief is looking to emulate the Ottawa way on cutting deficits.

The land of a thousand stereotypes - from Mounties and ice hockey to language wars and lousy weather - is feeling entitled to do a bit of crowing as it hosts the G-20 summit of wealthy and developing nations.

"We should be proud of the performance of our financial system during the crisis," said Finance Minister Jim Flaherty in an interview with The Associated Press.

He recalled visiting China in 2007 and hearing suggestions "that the Canadian banks were perhaps boring and too risk-adverse. And when I was there two weeks ago some of my same counterparts were saying to me, 'You have a very solid, stable banking system in Canada,' and emphasizing that. There wasn't anything about being sufficiently risk-oriented."

The banks are stable because, in part, they're more regulated. As the U.S. and Europe loosened regulations on their financial industries over the last 15 years, Canada refused to do so. The banks also aren't as leveraged as their U.S. or European peers.

There was no mortgage meltdown or subprime crisis in Canada. Banks don't package mortgages and sell them to the private market, so they need to be sure their borrowers can pay back the loans.

"Our banks were just better managed and we had better regulation," says former Prime Minister Paul Martin, the man credited with killing off a massive government deficit in the 1990s when he was finance minister, leading to 12 straight years of budget surpluses.

"I was absolutely amazed at senior bankers in the United States and Europe who didn't know the extent of the problem or they didn't know that people in some far-flung division were doing these kinds of things. It's just beyond belief," he told the AP.

The Conservative Party government of Stephen Harper that took over from Martin's Liberals in 2006 broadly stuck to his predecessor's approach, though he cut taxes and, when recession struck, pumped stimulus money into the economy, with the result that Canada again has a large deficit.

But it is recovering from the recession faster than others, and although its deficit is currently at a record high, the International Monetary Fund expects Canada to be the only one of the seven major industrialized democracies to return to surplus by 2015.

This month Canada became the first among them to raise interest rates since the global financial crisis began.

"They brought together the best brains both inside and outside government to carry out a fundamental reassessment of the role of the state," Osborne said in a speech.

It's a remarkable turnaround from 1993, when the Liberals took office facing a $30 billion deficit. Moody's downgraded Canada's credit rating twice. About 36 percent of the government's revenue went toward servicing debt.

"Our situation was dire. Canada was in a lot of trouble at that point," Martin said. "If we were going to preserve our health care and our education system we had to do it."

As finance minister, he slashed spending. A weak currency and a booming U.S. economy also helped Martin balance the books. In the 1998 budget the government estimated that about 55 percent of the deficit reduction came from economic growth and 35 percent from spending cuts.

"The rest of the world certainly thinks we're the model to follow," said Martin, who was prime minister from 2003 to 2006. "I've been asked by a lot of countries as to how to go about it."

Don Drummond, Martin's budget chief at the time, says the U.S. and Europe won't have it that easy, because the economic climate was better in the late 1990s than it is now, with large trade gains and falling interest rates.

"There's a lot to learn from Canada but their starting conditions are worse," he said. "Even though we were on the precipice of a crisis we weren't in as bad a shape as many of them are."

U.S. troops that were stationed at Al Asad Airbase in Iraq are still feeling the effects from Iranian ballistic missiles more than one year after the attack.