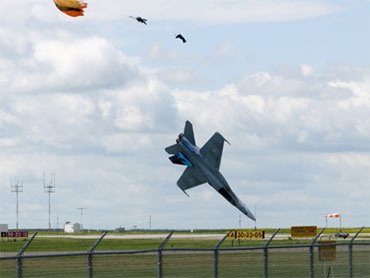 A Canadian air force jet crashed and exploded in a ball of flames during a training run for a weekend international air show in Alberta, but the pilot was able to eject from the plummeting plane before it hit the runway.

The pilot, Capt. Brian Bews, who sustained a sore back and scraped-up arms, was treated at a hospital and released Friday.

Bews was practicing Friday in a CF-18 Hornet jet over Lethbridge County Airport for an international air show. The CF-18 he was flying is a model specifically used for air shows.

"All of a sudden you could hear 'pop, pop, pop,' " witness Roland Booth told CTV News. "I saw sparks come out of the one engine. The plane started banking over to the side. That's when the pilot bailed out with his parachute."

Another witness, aviation buff Darren Jansens, says the pilot was just starting a maneuver known as a High Alpha pass before the accident.

"It's a high-angle pass, very low speed, fairly close to the ground. It's the lowest-speed maneuver the Hornet generally performs," said Jansens.

"The pilot did eject safely but was dragged several hundred feet unconscious along the ground," he added.

The military and the Department of Transport immediately launched an investigation into the accident. There was no indication of the cause of the accident.

Air show president Robb Engen said the airport was briefly closed to all incoming and outgoing flights, but he said the event, which is in its 19th year, would go ahead as planned this weekend.

"We did have an unfortunate incident during a practice run this afternoon, but the military has given us their full support to continue for the weekend," said Engen. "The show is continuing as originally planned. Thankfully the pilot, as we hear, is OK."

Bews, who was assigned to 425 Tactical Fighter Squadron based at Bagotville, Quebec, was selected by the air force to join the CF-18 demonstration team for 2010.

The accident will have no impact on CF-18 operations elsewhere in the country, 2nd Lt. Christopher Daniel said from Ottawa.

"It is one of the most reliable airplanes you can buy on the market. Its safety record is second to none. I have no problem getting in the airplane and I know that Capt. Bews will be eager to get back in as well," Daniel said.