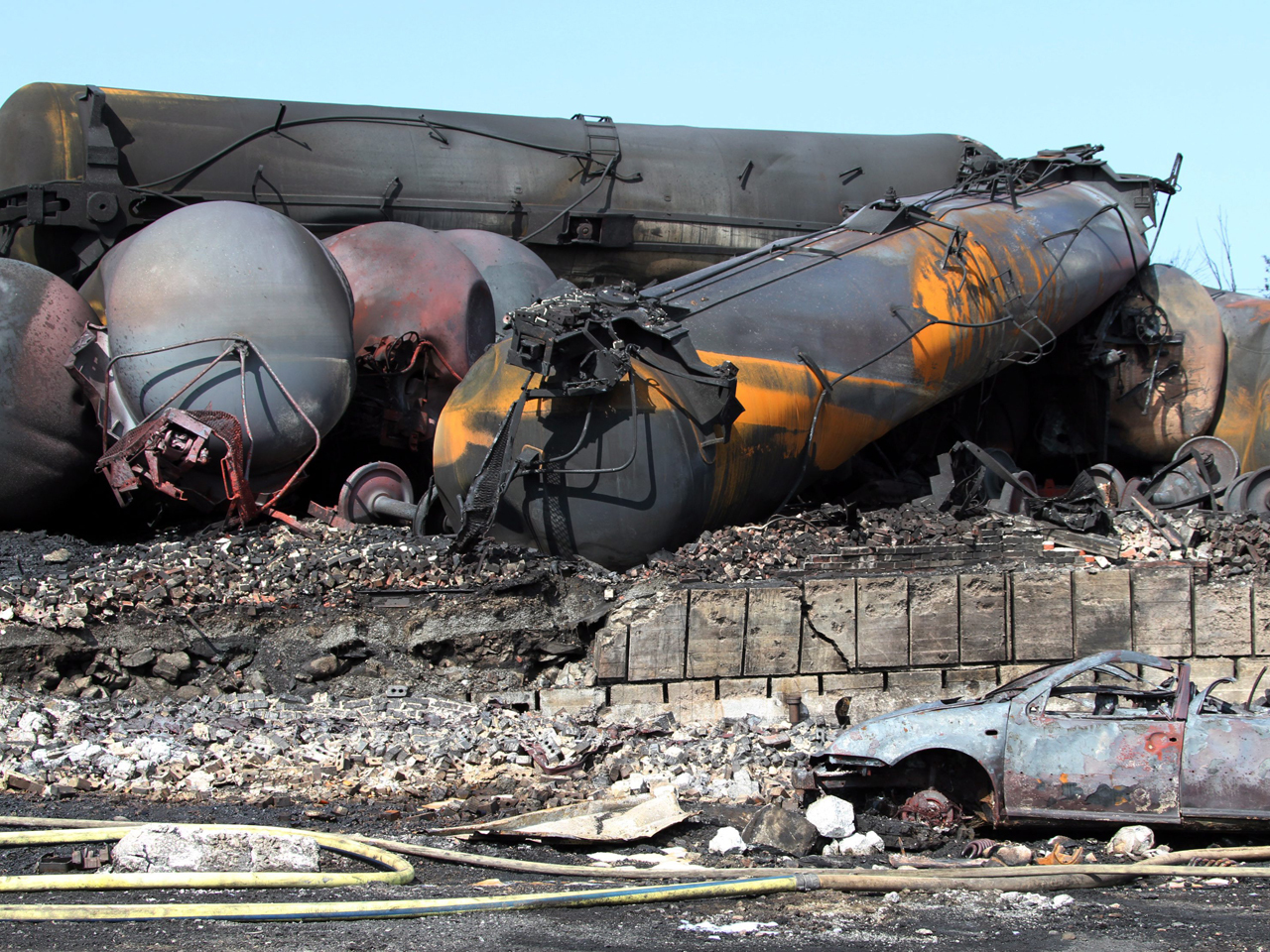 Canadian authorities raised the number of people who remain unaccounted for Wednesday after a runaway oil train derailed last weekend in a downtown Quebec district.

Sixty people were still missing after the derailed train ignited Saturday's inferno, the police said. Previously, police said some 50 people were reported missing. At least 15 people died in the accident.

Quebec police inspector Michel Forget ruled out terrorism as a cause, but said that an array of other possibilities remain under investigation, including criminal negligence. Other officials have raised the possibility that the train was tampered with before the crash early Saturday.

"This is an enormous task ahead of us," Forget said. "We're not at the stage of arrests."

Edward Burkhardt, president and CEO of the railway's parent company, Rail World Inc., was headed to Lac-Megantic Wednesday, his first visit to disaster site since the accident. In earlier media interviews, the Illinois-based Burkhardt had said he figured he'd have to wear a bullet-proof vest to the town.

Flanked by reporters at Montreal's Trudeau airport Tuesday evening, Burkhardt suggested firefighters who extinguished an earlier fire on the same train shared some of the blame.

The heart of the town's central business district is being treated as a crime scene and remained cordoned off by police tape — not only the 30 buildings razed by the fire but also many adjacent blocks.

Investigators continued searching for the missing, fearing three dozen more bodies are buried in the downtown area closest to the tracks. The death toll rose to 15 with the discovery of two more bodies Tuesday. The bodies that have been recovered were burned so badly they have yet to be identified.

On downtown's main street — Rue de Laval — police positioned a truck near the perimeter of the no-go zone, which prevented news crews from getting direct photo and video views of the search operations being conducted by some 200 officers.

Police officials left no doubt that the hunt for the missing people was taxing — they said two officers were withdrawn from the sector because of worries about their physical condition.

"This is a very risky environment," said Quebec Provincial Police Sgt. Benoit Richard. "We have to secure the safety of those working there. We have some hotspots on the scene. There is some gas."

The Montreal, Maine & Atlantic Railway train broke loose early Saturday and hurtled downhill through the darkness nearly seven miles before jumping the tracks at 63 mph in Lac-Megantic, in eastern Quebec near the Maine border, investigators said. All but one of the 73 cars were carrying oil. At least five exploded.

Rail dispatchers had no chance to warn anyone during the runaway train's 18-minute journey because they didn't know it was happening themselves, Transportation Safety Board officials said. Such warning systems are in place on busier lines but not on secondary lines, said TSB manager Ed Belkaloul.

The blasts destroyed about 30 buildings, including the Musi-Cafe, a popular bar that was filled at the time, and forced about 2,000 of the town's 6,000 residents from their homes. By Tuesday, only about 800 were still barred from returning to their homes, though residents were cautioned to boil tap water before drinking it.

Efforts continued Tuesday to stop waves of crude oil spilled in the disaster from reaching the St. Lawrence River, the backbone of the province's water supply.

A few hours before the crash, the same train caught fire in a nearby town, and the engine was shut down — standard operating procedure dictated by the train's owners, Nantes Fire Chief Patrick Lambert said.

Train company chief Burkhardt suggested that shutting off the locomotive to put out the fire might have disabled the brakes.

"The train had the engine shut down by the firemen, they didn't do that for malicious purposes by it's what happens," Burkhardt told reporters at the Montreal airport. "The firemen should have roused the locomotive engineer who was in his hotel and taken him to the scene with them. But it's easy to say what should have happened. We're dealing with what happened."

Lambert defended the fire department, saying that the blaze was extinguished within about 45 minutes and that's when firefighters' involvement ended.

Transportation Safety Board investigator Donald Ross said the locomotive's black box has been recovered, and the fire and the chain of events that followed were a "focal point" of the investigation.

The accident has thrown a spotlight on MMA's safety record. Before the Lac-Megantic accident, the company had 34 derailments since 2003, according to the U.S. Federal Railroad Administration. Over that period, the company was involved in five accidents that had reportable damage of more than $100,000.

Burkhardt said the figures were misleading.

"This is the only significant mainline derailment this company has had in the last 10 years. We've had, like most railroads, a number of smallish incidents, usually involving accidents in yard trackage and industry trackage," he told the CBC.

Nonetheless, Burkhardt predicted the accident would lead to changes in the way railways operate, and indicated that MMA would no longer leave loaded trains unattended, a practice he said was standard in the industry.

The tanker cars involved in the crash were the DOT-111 type — a staple of the American freight rail fleet whose flaws have been noted as far back as a 1991 safety study. Experts say the DOT-111's steel shell is so thin that it is prone to puncture in an accident, potentially spilling cargo that can catch fire, explode or contaminate the environment.

The derailment also raised questions about the safety of Canada's growing practice of transporting oil by train, and is sure to bolster the case for a proposed oil pipeline running from Canada across the U.S. — a project that Canadian officials badly want.