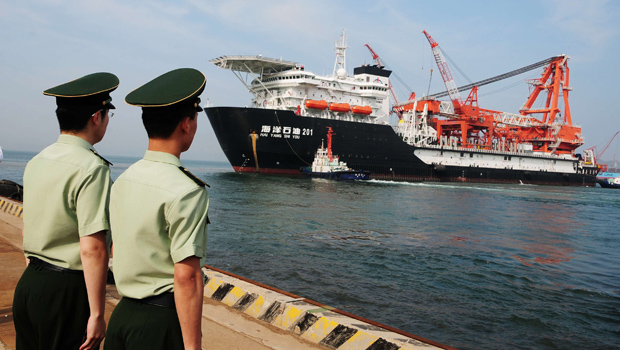 Prime Minister Stephen Harper said the government would only consider future takeover deals in the oil sands by state-owned companies in exceptional circumstances.

"To be blunt, Canadians have not spent years reducing ownership of sectors of the economy by our own governments only to see them bought and controlled by foreign governments instead," Harper said.

The prime minister's comments shed light on Canada's policy toward foreign takeovers in the oil sands, particularly when the foreign company is owned by the state.

Concerns have been raised that approvals could lead to a flood of deals that put control of Canada's vast energy resources in foreign hands.

"I do not believe that any major industrialized country would allow a major sector of its economy to be transformed into the property of a foreign government through a couple of transactions," Harper said.

The prime minister said the Alberta oil sands represent 60 percent of all the oil production around the world that is not already in state hands and said he wants to keep it that way.

"The government's concern has been that very quickly a series of large-scale controlling transactions by foreign state-owned companies could rapidly transform this industry from one that is essentially a free market industry to one that is effectively under the control of a foreign government," Harper said.

"That is obviously not something that we find desirable."

CNOOC and other big state-owned Asian energy companies have increased purchases of oil and gas assets in the Americas as part of a global strategy to gain access to resources needed to fuel their economies. Chinese companies have moved more carefully since CNOOC tried seven years ago to buy Unocal but was rejected by U.S. lawmakers who cited national security fears.

Harper's government originally turned down Petronas' bid for Progress Energy in October. The government did not publicly explain the decision to block the deal but said a new policy framework for foreign takeovers will be released soon. Petronas was allowed to reapply.

The decision to turn it down in October has raised doubts about whether Canada is open to foreign investment.

Harper has lobbied the Chinese to invest in Canada's energy sector and has said foreign investment is needed to develop Canada's vast oil and gas deposits. Turning down CNOOC's bid would have harmed relations with China. China's growing economy is hungry for Canadian oil. Chinese state-owned companies have invested billions in Canadian energy in recent years.

The Canadian province of Alberta has the world's third-largest oil reserves after Saudi Arabia and Venezuela: more than 170 billion barrels. Daily production of 1.5 million barrels from the oil sands is expected to increase to 3.7 million in 2025.

Nexen, a mid-tier energy company in Canada, operates in western Canada, the Gulf of Mexico, North Sea, Africa and the Middle East, with its biggest reserves in the Canadian oil sands. It produced an average of 213,000 barrels of oil a day in the second quarter of this year.

Nexen's board approved the takeover in July after CNOOC offered a 62 percent premium on the stock price. Shareholders voted overwhelmingly to support the deal in September. The stock has long traded at 10 percent discount to the offer on fears Canada would not approve the takeover.

Nexen stock traded down 6.5 percent after Industry Canada said an announcement would be made after the close. Progress traded down 5.4 percent.

In an apparent show of commitment to Canada's interests, CNOOC is pledging to set up a regional headquarters in Calgary, Alberta, where Nexen is based. It also says it will keep the Canadian company's management and projects in place and list shares on the Canadian bourse in Toronto.

Petronas has also made a series of promises in the proposed takeover of Progress.