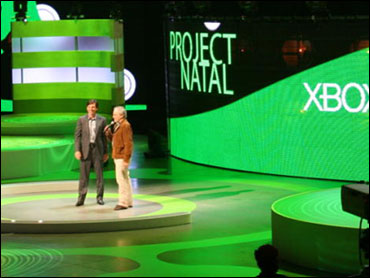 For those of you who have been waiting for some really big news to come out of the video game industry, Microsoft answered your call Monday with its innovative "Project Natal," a hands-free motion-sensitive controller system.

The technology, as demonstrated in the video below, appears geared toward allowing users to control games, movies, and anything else on their Xbox system with their hands alone, and without touching any hardware.

Now, in what is clearly an attempt by the Xbox maker to significantly broaden the potential reach of the console and its Internet component, Xbox Live, Microsoft is betting that it can finally impress many of the millions of people who would never, ever consider themselves gamers but who somehow ended up with a Nintendo Wii in their homes.

Natal, by comparison, provides much of that same functionality, but without having to hold on to the controller. Want to kick a ball in a game? Then make a kicking motion. Want to buzz in in a game show setting? Smack your fist into your hand. Want to share a drawing with an in-game avatar? Draw it and then hold it up to the Natal camera. As seen on-stage at E3, at least, it's all very simple, and very seamless.

So is Project Natal Microsoft's answer to the Wii-mote?

"And beyond, yeah," said Forrester principal analyst Paul Jackson. "Obviously, we've all got, in the game industry...a huge debt to pay to Nintendo for shaking things up a bit with the Wii, and for moving beyond the 37 button controller. This is taking things to the next extreme. Because even with the Wii, you still have (several) buttons, start and select. It's still a physical controller."

Added Jackson, Project Natal looks likely to "remove that final barrier between you sitting in your room and...what's on your screen."

Even given all that, however, a successful Natal launch is unlikely to knock Nintendo from the top of the next-generation console perch. The Wii's install base is huge, loyal and, in many cases, wary of Microsoft. And at the same time, one would have to expect that Sony, too, will be trying to get on the board with a full-scale motion-sensitive system.

Too early to tell

While there's no doubt that Microsoft caught everyone's attention with the Project Natal announcement, it's by no means certain that it will be a business success. For one, the company gave no indication of when the technology would be in users' hands. Nor did Microsoft say whether it would be sold as an Xbox accessory or be bundled with the console.

Microsoft Xbox Senior Vice President Don Mattrick did state that Project Natal would be compatible with every Xbox 360. But he didn't address how much it would cost, or whether it would be backward compatible with older Xbox 360 games. And afterward, Microsoft could not provide any additional details about the technology.

What this all means, then, is that while it's very clear Microsoft has some seriously cool technology on its hands, there's no way to judge--based on what we know right now, at least--whether Microsoft can successfully integrate Natal into its larger Xbox ecosystem. Still, given the company's deep pockets, and its traditional dedication to making new technology dominant, no matter how long it takes, I'd bet on Bill Gates & Co., having a winner with this one.

For one thing, Microsoft will finally have a response to the question of whether it can truly reach the mainstream. At the same time, however, it must find a way to attract that new audience while not alienating its core audience.

That's why Jackson said that no matter what happens with Natal, Microsoft is unlikely to abandon its traditional controller. It has to keep those core gamers, the ones who simply have to have their regular "Halo 3" gaming sessions, happy.

Jackson predicted that initially, Microsoft will sell Natal--or whatever it's called upon its release--in the $99 range. He pointed out that traditional controller systems come in the $50 range, but that Microsoft is going to have to pack some serious high-tech into Natal--a motion sensor, sophisticated directional microphones and video cameras.

SDKs begin arriving
On-stage at E3, Mattrick said that the Project Natal software development kits had just gone out. This means that while most of the video game world is in Los Angeles this week for the show, few people have had a chance to see it.

One who did get a sneak peek at Natal is Epic Games Design Director Cliff Bleszinski, the visionary behind "Gears of War."

"I had a chance to be hands-on with (Natal) a couple weeks ago," Bleszinski told CNET News, "and it was damned fun." But even Bleszinski said he hadn't gotten his hands on a SDK yet, and wasn't able to say anything about the development process.

And while one should always take what is said during a press conference with a grain of salt, one would think that someone like legendary film director Steven Spielberg wouldn't heap praise on anyone or anything unless he really meant it. And when he came on-stage during the briefing Monday, heap praise on Natal is exactly what he did.

So now we wait. Jackson said given the time frame of the SDKs and how long it takes developers to bring games to market, it would be unlikely that we would see Natal in gamers' hands before the middle of next year. In fact, given that time frame, E3 2010 may be a perfect place for Microsoft to formally launch the technology.

And whether it chooses to do so, it seems guaranteed that when Microsoft takes the stage for its E3 2010 press briefing, it will have some very big news in its pocket.