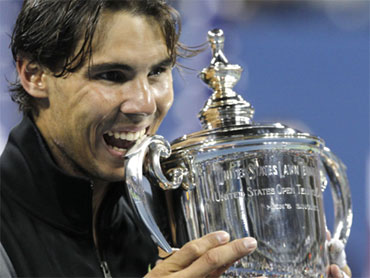 
The best player in the world. Novak Djokovic shouted it to a packed stadium. He was talking about Rafael Nadal. He was saying something we already know.

What we don't know is whether Rafa might become the best player in history.

"Right now," insisted Djokovic, "he has the capabilities to become the best player ever."

There's nothing Nadal hasn't done, not after Monday night in a U.S. Open that, because of the weather but not the two finalists, staggered to a close, a memorable one at that.

Rafa got the one he had been missing, got the one that made him the seventh man ever to take the career Grand Slam, the one that raised him up there with Rod Laver, Don Budge and Andre Agassi.

Nadal overcame a rain break of nearly two hours and a courageous performance by Djokovic, who against another player might have been the champion. Rafa won his U.S. Open, 6-4, 5-7, 6-4, 6-2, in the unyielding style that, at the age of 24, has lifted him to the top.

Then Rafa, as he has done every time he has won a Slam, the five times at Roland Garros in the French, the two times at Wimbledon, once at the Australian, tumbled to the court, perhaps as much in disbelief as in delight.

He grabbed his face in his hands and rolled around joyfully on the hard playing surface of Arthur Ashe Stadium as the 24,000 fans who had toughed out the weather for such a moment screamed their approval.

"You know this I dreamt," said Nadal, a native of the Spanish island of Mallorca, for whom English is never quite as easy as a forehand to the corner. "It is amazing to be in the final. When I hold the trophy in my hands, it is going to be unbelievable."

That came shortly when Lucy Garvin, president of the United States Tennis Association, presented him the gleaming award, on which such names as Roger Federer, Pete Sampras, John McEnroe and Pancho Gonzalez are inscribed, as well as a check for $1.7 million.

Even before the first shot of this tournament, Nadal was enthused about his chances even though he'd never previously even been in an Open final.

But Djokovic had been, losing to Federer three years ago.

"Well, sure," said Nadal, "this is one of the best moments of my career. Four months ago, everybody says, 'Rafa, I don't know if he's ever going to be on top.' And now I'm the best."

There wasn't an ounce of arrogance in the remark. Nadal was only thinking about his painful summer of 2009 when, hit by tendinitis in both knees, he was unable to defend his Wimbledon title and then lost in the semifinals of the Open.

The critics said Nadal's swashbuckling, all-out style, his slashing shots, his relentless hustle, doomed him to continued injuries and an early retirement.

Instead, improving a serve that might have been his only weakness, he became the first man since Laver in 1969 to win, in order, the French, Wimbledon and now the U.S. Open.

"Right now," said Djokovic, who had climbed to No. 2 in the rankings, behind Nadal, "he's the best and absolutely deserves this title."

The belief for much of this two-week festival of sport, which attracted more than 712,000 fans, was Federer, the No. 2 seed, would on the last day face Nadal, the man who had overtaken him at the summit. But the 23-year-old Djokovic, an athletically gifted Serb, defeated Federer in a five-set semi on Saturday, hours after Nadal won his semi.

That rain, for the third straight year, took control of the Open, pushing the final to Monday, was seen to be beneficial for Djokovic, who got an extra 24 hours to recover before he would play Nadal.

Djokovic, who does have a Slam, the 2008 Australian Open, played as well as he could. But seemingly every time Novak would put one down the line, out of nowhere, Nadal came flying over to rip the ball back across the net.

At least Djokovic won a set, thereby preventing Nadal from becoming the first man in 50 years, since Neale Fraser of Australia in 1960, to go through the tournament without dropping one. A small victory, perhaps, but a victory nevertheless.

"I think," Djokovic said of Nadal, "he's playing the best tennis that I have ever seen him play on hard courts."

Djokovic had beaten Nadal the last three times they met, all on hard courts.

"He has improved his serve drastically. The speed, the accuracy, and of course, his [play on the] baseline is as good as ever.

"He's a very complete player, and for me to win against him tonight, I had to be on top of my game. I was playing well most of the match, but there were some moments in, let's say, the third and fourth set when I dropped my focus a little bit."

"It's just great for somebody who had so much success as he did at a very young age," a gracious Djokovic said of Nadal, "to be able to continue motivating himself and to perform his best each tournament, each match he plays, regardless of who he has across the net.

"Great champion, great person and a great example of an athlete."