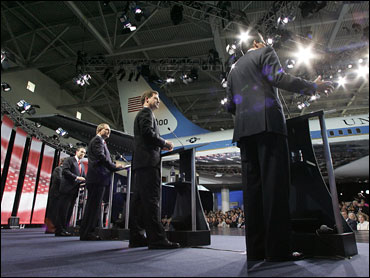 
What did we learn from the recent Democratic and Republican debates?

Not much that I could tell, except that you can't hold a debate among nine or ten people. What we saw were more like movie trailers than debates — previews of coming attractions, and clearly these coming attractions need a lot of editing.

There is worse to come, though. With more and more states moving their primaries to late January and early February — 25 or so, including Florida, Texas and California, at last count — we are heading toward what will amount to a national primary in which the nominees of both parties could be decided eight months before Election Day.

What's wrong with that? Since candidates can't travel to all those states at once, they'll have to campaign almost exclusively with TV commercials which will drive the costs even higher and give the big money contributors more influence than ever.

And if the nominees are decided early, what will they do with eight months on their hands? I'll go out on a limb and predict they'll spend every waking moment raising more money to buy more commercials.

Here's an alternative thought: Once we know who the nominees are, why don't the parties just certify them immediately and let them begin a series of debates with each other — real debates. And forget the nominating conventions.

And then, as Election Day nears, take the suggestion that was once made to John Kennedy by Barry Goldwater: The nominees get on the same airplane and tour the country making joint appearances. Is that farfetched? No question. But wouldn't we be all better served — and I mean all of us and the candidates?