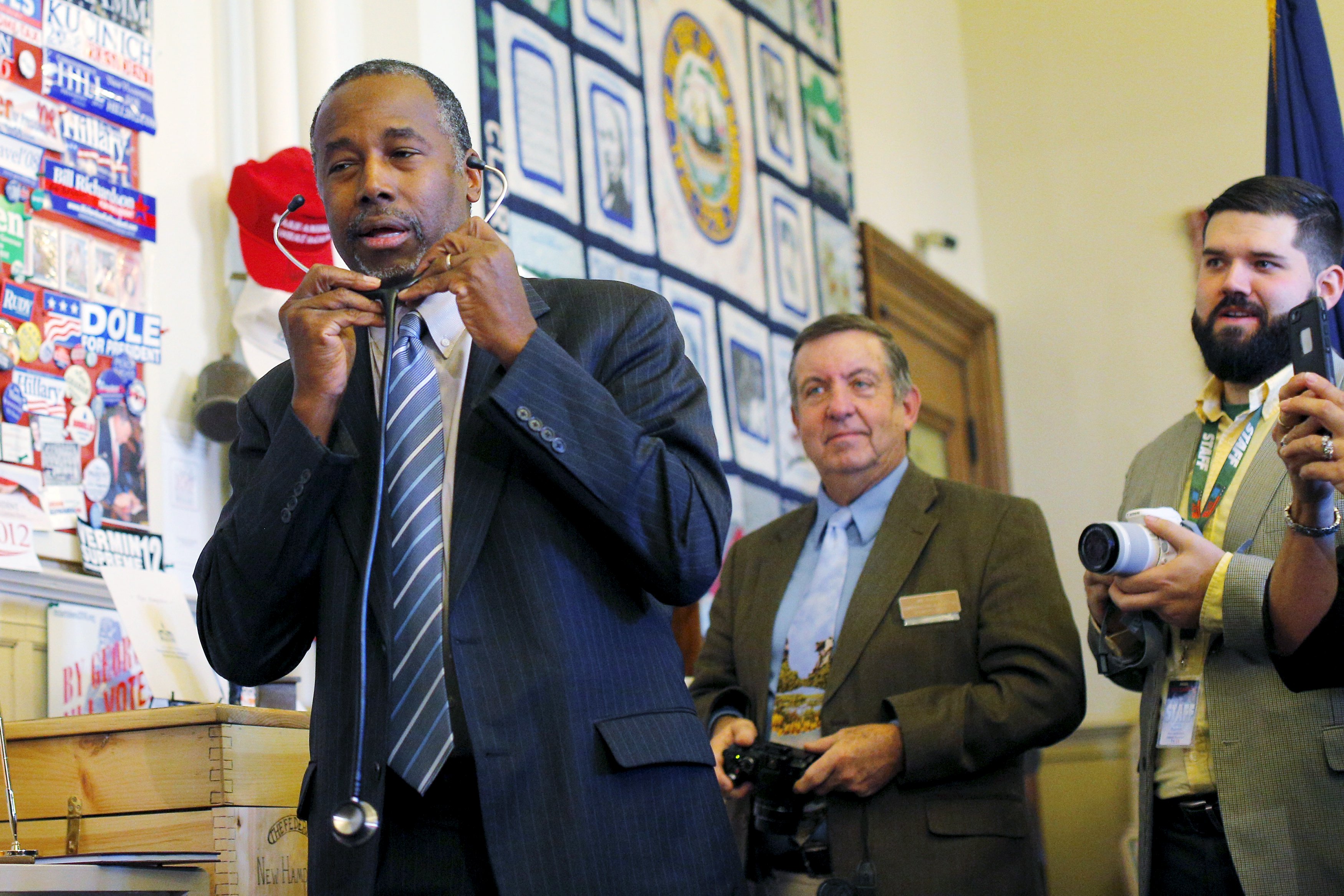 CONCORD, N.H. -- Between filing for New Hampshire's first-in-the-nation primary and a celebratory vanilla milkshake from Burger King, Ben Carson was quizzed by reporters Friday over what to do with Syrian refugees in the wake of the Paris terror attacks, proposing the United States should have a "database" of every person entering the United States and suggesting Muslim mosques should be subject to increased scrutiny.

Carson tried to split hairs when pressed about whether he was calling on Muslims to be singled out, saying the government should "have a database on everybody who comes into this country" and "everybody who is already here." He said the country should not discriminate based on race or religion.

"You know one of the hallmarks of America is that we treat everybody the same. So if we're just going to pick out a particular group of people based on their religion, based on their race, based on some other type of thing, that's setting a dangerous precedent," Carson said.

"If you want to add more things to that, we can talk about it and what the rationale is," Carson added.

When pressed on increased scrutiny of mosques, Carson -- the final candidate to file his paperwork in New Hampshire Secretary of State Bill Gardner's office on the last day of filing period -- told the media that "protection of our people" was a "top shelf" priority and so if mosques are radicalizing people, "then they should be treated differently."

A reporter followed up accusing Carson of violating the civil liberties of American Muslims.

"Did you actually hear what I said?" Carson asked. "I said: a mosque where there is activity -- terrorist activity or activity encouraging insurgency -- should be treated differently. And I would say that about any kind of institution, quite frankly."

When a reporter asked if he would increase scrutiny of a Christian church, Carson replied, "Of course!" if "they were trying to create terrorists."

Carson also clarified his controversial remarks from the previous day where he likened Syrian refugees to "rabid dogs," blaming people "in our country who sit around and completely miss the big picture" and instead focus on "little words."

"Now what I actually said is, if you had a kid and you knew there was a rabid dog outside you'd probably -- even though you love dogs -- bring that kid in, call the humane society, make sure that dog was off the street," Carson explained. "The point being there are people who are radical jihadists and they want to destroy us. And we don't want to expose our people to those even though we may love all other people from Syria."

Woven throughout questions of Carson's foreign policy plans were questions of his understanding of foreign policy, which he in turn used to criticize the media's tendency to "take things out of context for a story that they want to write."

"I get daily briefings and I have multiple meetings with people," Carson said. "What I would say is, listen to my policies. Actually listen to my solutions. You will find that they compare favorably with anybody. But don't listen to the narratives that try to say, 'Oh he doesn't know anything,' and therefore I can say exactly the same things someone else is saying and they say, 'Oh look, he knows what he's talking about.'"

Carson announced that next week, he would be releasing a list of his foreign policy advisers and that he also was expecting his one millionth small donor contribution.

The retired neurosurgeon is second to Donald Trump in New Hampshire polls. Despite a conservative bend that has traditionally fared better in Iowa, Carson said he doesn't plan to change his message to win New Hampshire. He responded to critiques of the amount of time he has spent in the Granite State by pointing to his campaign's use of social media to help people understand his views, regardless of his location.

"I don't sit there with a tally sheet and say, 'Oh he's been here three more times than I have so I gotta get there,'" Carson said. "I think the American people are actually smarter than that and have actually moved beyond the 'how many times have you come here' state of mind to the 'what do you have to say' and 'what is going to help my children and grandchildren.'"

Carson wrapped his visit to Gardner's office with a trip to the State House Visitor Center where he presented State House employees with a stethoscope that he placed in a ballot box time capsule that was to be opened in 100 years.

"I'm here to hear the heart of New Hampshire," Carson exclaimed to excited fans and onlookers.

After leaving the State House, he stopped at Burger King before catching a flight to Iowa. The presidential candidate sat in a booth sipping on a vanilla milkshake as he waited with staff for his veggie burger to go.