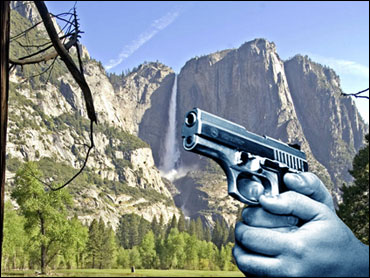 (CBS/AP)
The fact that a new law allowing loaded guns in national parks went into effect on the same day (today) as rules imposing restrictions on credit card companies is no coincidence: In a nice illustration of the way things work in Congress, the guns bill was attached as an amendment to the (completely-unrelated) credit card legislation back in May.

The new rule allows people to carry firearms, including semi-automatic weapons, in most national parks and wildlife refuges, so long as they follow the gun laws of the state. (That could get a little complicated, as more than 30 parks occupy land in multiple states.) As the Los Angeles Times points out, that means people can now carry concealed weapons while camping in places like Yellowstone, the Grand Canyon and Yosemite.

Critics, including former directors of the National Park Service, complain that the rule marks parks more dangerous: They argue that the decision to overturn a 1983 law visitors mandating that visitors had to unload and disassemble their guns and place them somewhere not-easily-accessible increases the prospect of violence. The new rule is "a risky change that will endanger families, hikers, those who work in these places and the park rangers themselves," as a Ventura County Star editorial put it.

"When you are at a campfire and people are getting loud and boisterous next to you, you used to have to worry about them quieting down. Now you have to worry about when they will start shooting," Paul Helmke, president of the Brady Campaign to Prevent Gun Violence, told the Associated Press.

Defenders of the new rule like David Codrea counter that the rule won't legalize murder or poaching.

"An otherwise peaceable armed citizen who gets by just fine with his guns outside park boundaries won't suddenly undergo a personality transformation once he crosses a line on a map," he argues. "And a criminal, who is not predisposed to obeying rules, won't alter his behavior one way or another."

The new rule is a reminder of how, despite Republican fears that President Obama and the Democratic Congress would set limits on gun ownership and freedom, Democrats have largely embraced traditionally-Republican positions on gun rights over the past year. The amendment to the credit card bill making the new rule passed with the support of 67 senators -- 27 of whom were Democrats, including Senate Majority Leader Harry Reid.