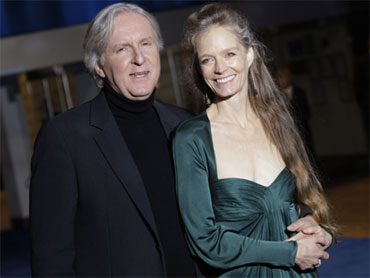 A delighted audience clapped and cheered as the lights came on after the world premiere of James Cameron's sci-fi extravaganza "Avatar" in London on Thursday.

The 3-D epic about humans taking extraterrestrial form as they explore a distant world is reportedly one of the most expensive movies ever made, with a price tag well in excess of the $200 million spent to make "Titanic."

The industry has been watching closely to see how audiences respond to Cameron's long-awaited film, which uses cutting-edge digital technology to create dizzying special effects. On Thursday, the film provoked a breathless response from many in the audience.

The King of the World
Will "Avatar" Ride "Titanic's" Wake?
On the Set of "Avatar"
The Showbuzz: "Avatar"
James Cameron's "Avatar"

"It's brilliant, it's as good as the hype, both the 3-D effects and the story," said 28-year-old Victoria Blasdale.

"This was remarkable, Unlike anything I've ever seen before," added law maker John Whittingdale, who had joined the media, Cameron fans and families at the premiere.

Stars Sigourney Weaver and Zoe Saldana joined the crowds on a specially made blue carpet at London's Leicester Square before the gala screening at two massive side-by-side movie theaters.

Cameron said the movie, set in the future on an alien planet being pillaged by humans for natural resources, deals with how indigenous people are treated by newcomers.

"It's a way of connecting a thread through history. I take that thread further back to the 16th and 17th centuries and to how the Europeans pretty much took over South and Central America and displaced and marginalized the indigenous peoples there," he said.

"There's just this long, wonderful history of the human race written in blood going back as far as we can remember, where we have this tendency to just take what we want without asking," he said.

Weaver said she didn't consider the film a sci-fi movie. "I consider it an old-fashioned, epic swashbuckling romance," she said.

There's a topical environmental message too. As humans exploit their new-found world the indigenous species of the planet harmonize with nature to fight back.

"There's a sense of entitlement - we're here, we're big, we've got the guns, we've got the technology, we've got the brains, we therefore are entitled to every damn thing on this planet," said Cameron, describing the attitude of humans in the movie.

"That's not how it works and we're going to find out the hard way if we don't wise up and start seeking a life that's in balance with the natural cycles of life on earth."

Cameron conceived the story for "Avatar" in 1995 then waited a decade for technology to catch up so he could film it. The film mixes live action and computer animation to create an eye-poppingly vivid alien world.

"Avatar" is Cameron's first narrative film since 1997's "Titanic," which won 11 Academy Awards and has taken $1.8 billion worldwide at the box office.

"Avatar" opens around the world next week.
By Sylvia Hui