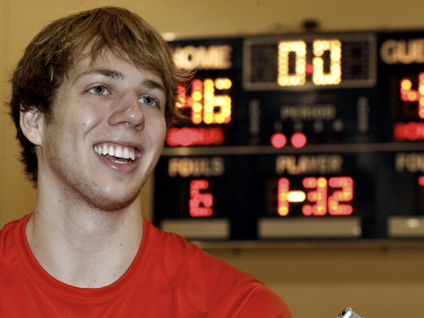 NEW YORK - In what some are calling revenge of the nerds, a 26-year losing streak ended for a college that has produced a lot of winners, just not on the basketball court, "CBS Evening News" anchor Katie Couric reports.

"It's probably the best way I can end my career that I can think of, making a last second shot," said Elmquist. "I can't think of a better storybook ending."

He's not the first Caltech sports star, but he's the first in a while who was actually playing in the game. Fifty years ago, Caltech students scored points for ingenuity at the Rose Bowl, altering a color-coded card system to spell out Caltech as the Washington Huskies played the Minnesota Golden Gophers. Known more for physics than phys ed, the school's hall of fame boasts 31 Nobel Prize winners.

"We had more kids who were valedictorians than played high-school basketball," Elmquist said.

But for coach Oliver Eslinger, Tuesday night was a little bit of genius.

As for Elmquist, like any varsity star he's off to the play in the big leagues, as a software engineer for Google.

Caltech ends the season with five wins in all, four of them outside its conference.