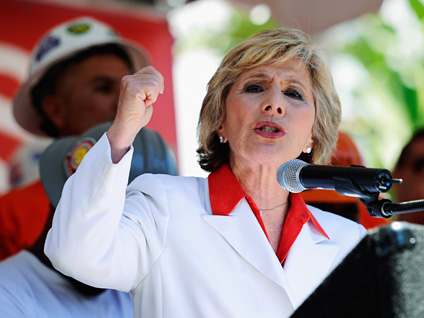 In preliminary CBS News exit poll results, Californians approve of the way President Obama is handling his job (54%), which is the opposite of the national mood. Nationally 45% of all voters approve of the president's job performance. Voters in the Golden State have a more positive opinion of the Democratic Party (50%) than they have of the Republican Party (34%). (see the full exit poll)

Ominous Signs For Obama In 2012
Why Democrats Lost the House to Republicans
Why Key Midwest Swing States Flipped to the GOP
Harry Reid Wins: How He Did It
Who Are the Tea Party Supporters?

Among California voters who want to repeal the new law, 84% voted for Fiorina, while Boxer got most of the voters who say they are for either expanding the new health law or leaving it as is. One other major issue for both the Senate and governor's race is illegal immigration. Illegal immigration is a major issue (compared to the strong anti-immigration law in Arizona) and two-thirds of the voters support a chance for these undocumented workers to apply for legal status (and most of these voters supported Boxer).

Boxer won a long, hard fought campaign to recapture her seat. She's been in office 18 years, while running against Republican candidate Carly Fiorina. Fiorina had no political experience but was CEO of Hewlett Packard. The advertising campaigns were brutal: Boxer's ads saying that Fiorina let go 30,000 jobs as CEO of HP and shipped them overseas. Fiorina's ads saying that Boxer is in office too long. accomplished nothing and is out of touch with Californians.

Unlike Californians, Fiorina was much more conservative than the constituency she wanted to serve. California is not a conservative state like Arizona and other sunbelt states and has voted for a Democratic president the last three elections - there are more registered Democrats than Republicans, yet declined-to-states (independents) are increasing each election year. Right now declined-to-states are about one out of every five voters. The issues that are important to the electorate align more with what Boxer stands for than her opponent. The Democratic senator is a strong pro-choice candidate, against off-shore oil drilling and was against the war in Iraq. The opposite of what Fiorina thinks, plus she was endorsed by Sarah Palin who has a high unfavorable rating in the state.

According to CBS News Exit Poll a look at some demographic groups that supported both candidates:

The CBS News exit poll was conducted by Edison Research for the National Election Pool. Preliminary results are based on 3,809 voters in California interviewed either after exiting the polls across the state or by telephone for early voters. The poll has a margin of error of plus or minus two percentage points.

Susan H. Pinkus is the former director of the Los Angeles Times Poll and is now doing her own public opinion research at S. H. Pinkus Research & Associates.

Last WWII Medal of Honor recipient to lie in honor at U.S. Capitol
Thanks for reading CBS NEWS.
Create your free account or log in
for more features.
View CBS News In
CBS News App Open
Chrome Safari Continue
Be the first to know
Get browser notifications for breaking news, live events, and exclusive reporting.