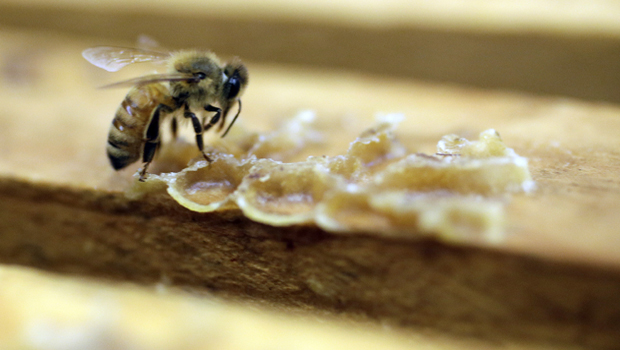 California's record drought hasn't been sweet to honeybees, and it's creating a sticky situation for beekeepers and honey buyers.

The state is traditionally one of the country's largest honey producers, with abundant crops and wildflowers that provide the nectar that bees turn into honey. But the lack of rain has ravaged native plants and forced farmers to scale back crop production, leaving fewer places for honeybees to forage.

The historic drought, now in its third year, is reducing supplies of California honey, raising prices for consumers and making it harder for beekeepers to earn a living.

"Our honey crop is severely impacted by the drought, and it does impact our bottom line as a business," said Gene Brandi, a beekeeper in Los Banos, a farming town in California's Central Valley.

The state's deepening drought is having widespread impacts across the state. More than 80 percent of the state is under "extreme" or "exceptional" drought, according to the U.S. Drought Monitor. Gov. Jerry Brown has declared a drought emergency, and residents now face fines of up to $500 a day for wasting water.

The drought is just the latest blow to honeybees, which pollinate about one third of U.S. agricultural crops. In recent years, bee populations worldwide have been decimated by pesticides, parasites and colony collapse disorder, a mysterious phenomenon in which worker bees suddenly disappear.

The drought is worsening a worldwide shortage of honey that has pushed prices to all-time highs. Over the past eight years, the average retail price for honey has increased 65 percent from $3.83 to $6.32 per pound, according to the National Honey Board.

Since the drought began, California's honey crop has fallen sharply from 27.5 million pounds in 2010 to 10.9 million pounds last year, according to the U.S. Department of Agriculture. And this year's crop is expected to be even worse.

California was the country's leading honey producer as recently as 2003, but it has since been surpassed by North Dakota, Montana, South Dakota and Florida. In 2013, California produced less than 10 percent of the country's $317 million honey crop.

On a recent summer morning in Los Banos, swarms of honeybees surrounded Gene Brandi and his son Mike, wearing white helmets with mesh veils, as they cracked open wooden hives and inserted packets of protein supplement to keep the insects healthy.

This year their colonies have only produced about 10 percent of the honey they make in a good year, said Brandi, who is vice president of the American Beekeeping Federation.

Besides selling honey, beekeepers earn their living from pollinating crops such as almonds, cotton, alfalfa and melons. But farmers are renting fewer hives because the lack of irrigation water has forced them to tear out orchards and leave fields unplanted.

Like many beekeepers, Brandi is feeding his bees a lot more sugar syrup than usual to compensate for the lack of nectar. The supplemental feed keeps the bees alive, but it is expensive and doesn't produce honey.

"Not only are you feeding as an expense, but you aren't gaining any income." said Brandi's son Mike, who is also a beekeeper. "If this would persist, you'd see higher food costs, higher pollination fees and unfortunately higher prices for the commodity of honey."

Many California beekeepers, including Gene Brandi's brother, are taking their hives to states such as North Dakota where they can forage in clover and buckwheat fields.

The drought is hurting businesses such as Marshall's Farm Honey, which supplies raw honey to high-end restaurants, grocery stores and farmers markets in Northern California.

The Napa Valley business is having trouble making and buying enough honey to meet the demands of its customers. Many varieties such as honey made from sage and star-thistle aren't available at all because it's too dry for their flowers to produce nectar.

"They keep coming back wanting more, and it's very painful to have to say, `We don't have it,'" said Helene Marshall, who runs the business with her husband Spencer. "There's increased demand because of increased awareness of how good it is for you, and there is less supply."

Spencer Marshall, who maintains hives throughout the San Francisco Bay Area, said this is by far the worst year for honey production he's seen in five decades of beekeeping. When the drought ends, "the bees may come back, but the beekeepers may not," Marshall said.

Amelia Barad-Humphries, who owns a restaurant and floral business in Napa Valley, said she's concerned about the drought's impact on bees and honey supplies. She said she eats a teaspoon of local honey every day to keep her allergies in check and she relies on bees to pollinate her backyard garden.

"We need honeybees for everything," she said. "People should be paying attention."