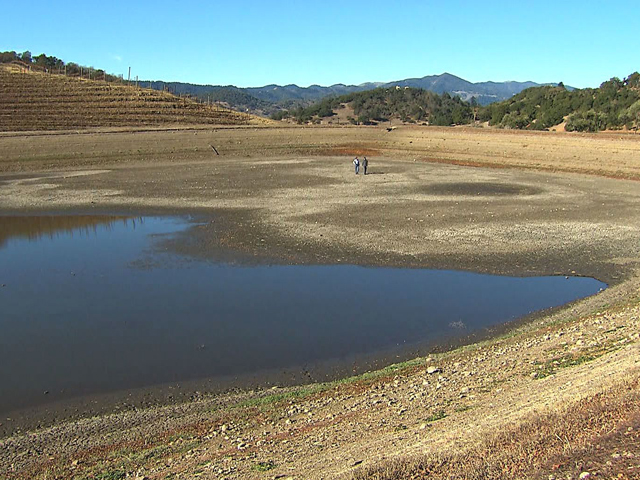 BERKELEY, Calif. -- Government forecasters predicted Thursday that the weather system known as El Nino could return this year. It could bring much-needed rain to the West. Ninety-five percent of California is in drought, and some scientists are now warning of a megadrought.

Scientist Lynn Ingram, author of "The West without Water: What Past Floods, Droughts, and Other Climatic Clues Tell Us about Tomorrow," uses sediment cores inside tubes to study the history of drought in the West.

That record shows California is in one of its driest periods since 1580.

While a three-to-five-year drought is often thought of as being a long drought, Ingram says history shows they can be much longer.

The evidence of these so-called "megadroughts" is found in San Francisco Bay. Ingram and her team at the University of California Berkeley remove the sediment from the bay and nearby marshes.

"What you notice is that the vegetation shifts to more salt-tolerant type vegetation," she says.

That's because during drought, there is less fresh water runoff into the bay. Tree rings on ancient tree stumps tell the same story: narrow or non-existent rings during decades of drought.

"These patterns tend to repeat themselves," Ingram says. "I mean, we can expect that this will happen again."

Scientists say their research shows the 20th century was one of the wettest centuries in the past 1,300 years. During that time, we built massive dams and rerouted rivers. We used abundant water to build major cities and create a $45 billion agriculture industry in a place that used to be a desert.

Even after several inches of rain last week, the drought continues. Ingram believes California should be prepared for an eventual 100-year-long dry period.