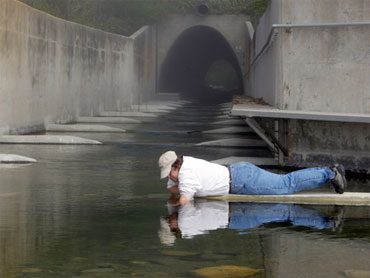 California agencies have spent millions of dollars on concrete fish ladders, cameras, fishways and other contraptions to allow endangered trout to spawn in Southern California streams.

The problem, even some conservationists say, is that there is little evidence construction efforts since the 1980s have done anything except absorb taxpayer dollars.

The work to save the steelhead species has led to about a dozen concrete fishways at a cost of more than $16.7 million.

A $1 million fish ladder - a structure designed to allow fish to migrate upstream over a barrier - may cost $7.5 million in federal economic stimulus funds to rebuild.

Another fish ladder would require fish to leap 8 feet to reach it. Studies alone for replacing a third ladder have cost an estimated $3 million.

"If we do a series of crappy projects like fish ladders to nowhere ... then the public trust for giving money for these types of projects is going to go away," said conservationist Mark Abramson of the Santa Monica Bay Restoration Foundation.

The latest project is a $935,000 effort to pave over part of a popular beach with cement and boulders to build a freeway of sorts for fish. The California Department of Transportation wants to build a passage for steelhead across Dan Blocker State Beach, named for the actor who played Hoss on TV's "Bonanaza."

The artificial streambed, up to 60 feet wide and extending 102 feet onto the beach, would create pools allowing the fish to swim under the Pacific Coast Highway, then upstream.

The plan makes no sense to restaurant owner Daniel Forge, who decided to sell a patch of property to the transportation department.

"They decided we were going to bring back steelhead to the stream but I don't think there were ever any steelhead along there," Forge said.

Steelhead were once teeming in Southern California waters. Over the years, however, development encroached and waterways were channelized, cutting off their pathways to spawning grounds.

When the fish were listed as endangered in 1997, only an estimated 500 adults were left from Santa Barbara to Mexico. Many believe southern steelhead are worth saving because they are more adaptable than steelhead elsewhere and could be key to the survival of the species.

While there are no hard numbers to show steelhead are rebounding from these construction efforts, wildlife officials say anecdotal evidence suggests more adult fish are spawning.

Unconventional methods are necessary sometimes, they say, because ripping out dams and other obstructions to spawning is not realistic.

"Nobody really wants (construction) as a solution," said Mary Larson, who oversees steelhead recovery for Fish and Game in Southern California. But she believes the proposal to build a fishway in Malibu could work. "Frogs just need good, quiet waters, birds need good tall trees to nest but my fish need to travel."

Conservationists believe that federal and state agencies should push more for restoring the species' natural environment, such as projects that have successfully cleared waterways of debris and crossings from miles of waterways.

National Marine Fisheries Service has created a recovery plan for the species that is expected to be finalized later this year. That plan would coordinate recovery efforts and would emphasize restoration of historic habitat.

Exasperation over getting the fish where they need to go has led to some imaginative proposals over the years, such as trucking the fish to spawning grounds or building fish elevators to get them over dams.

But government agencies have footed the bill for many projects including the concrete fish ladders and fishways to help the steelhead get around dams and other structures. The ladders are expensive, short-lived, require maintenance and have even been known to harm fish.

"We have a complicated situation we're dealing with and I don't think we've ever taken a position that there's only one way," said Mark Capelli, the steelhead recovery coordinator with the fisheries service, who called the recovery one of the more ambitious in the agency's history.

"There may be circumstances where artificial methods are appropriate and necessary," he said.