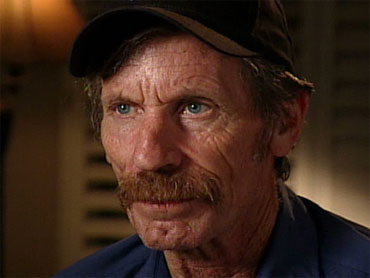 Although Phoenix cab driver Tom Chappell insists he always knows where he's going, he has been known to miss a turn or two.

"I was running about 30 minutes late. When I finally did pick her up she was not a happy camper," said Tom.

"Well, I mean I'm expecting a cab driver to be able to find his way," said Rita.

Rita didn't tip him. In fact, she was hoping she'd never see him again - but fate had other plans. Over the next two months, it seemed like every time Rita called a cab - Tom was dispatched.

"I'm thinking 'Why Lord?' Why are you picking me," said Tom.

Tom says Rita continued to be cranky, even when he wasn't late. Most cab drivers would have probably barked right back, but not Tom. Tom just wondered about her.

He wondered if her attitude had anything to do with where he was taking her all the time - a medical office with a door that read "kidney dialysis."

"So I went to the library and started learning more, and then I started understanding why she was that way," Tom said.

Through his research and from talking to Rita, Tom learned how physically and emotionally draining dialysis can be. He learned what Rita really needs is a kidney transplant, but none of her friends or family are suitable donors. And finally, he learned something about himself - something incredible, really.

"I try to be as good to people as I can. In fact, I've always said I'd give someone the shirt off my back if they asked me for it, but I never thought about giving somebody a part of me," he said.

"You know, it's just unbelievable that the cab driver wants to give me his kidney," said Rita.

Of course, Rita knew Tom probably wouldn't be a match, but the fact that he so sincerely offered meant the world to her. And later, when he actually followed through and got tested, she was blown away. And when those test results came back, they were both in utter disbelief.

"They said if it was any closer we'd be siblings," Tom said in disbelief.

The surgery is planned for later this year.

Rita said, "I tell him it's hard for me to express in words how grateful I am."

Tom says it's nothing, really. He says he just had a talk with God and God thought it was a good idea. He never expected there to be anything in it for him - but there was.

Not a kidney, but a piece of his heart that was lost. Tom reconnected with a daughter he hadn't seen in 30 years.

She saw his story on the local news. And they talked. They talked for a long time.

Tom says that after an ugly divorce, his wife took their daughter and disappeared.

The irony is that, part of the reason Tom offered Rita his kidney in the first place is because he figured he didn't have a whole lot more to live for anyway.

Tom told Rita, "This has not just given you a new life. It's given me another life."

If all goes well they should both be enjoying those new lives by this Christmas.

Tom's boss, Chicago-based Flash Cab has agreed to not only keep paying Tom while he's recovering from the surgery - but they're also paying for his airline ticket to Kentucky to see his daughter.