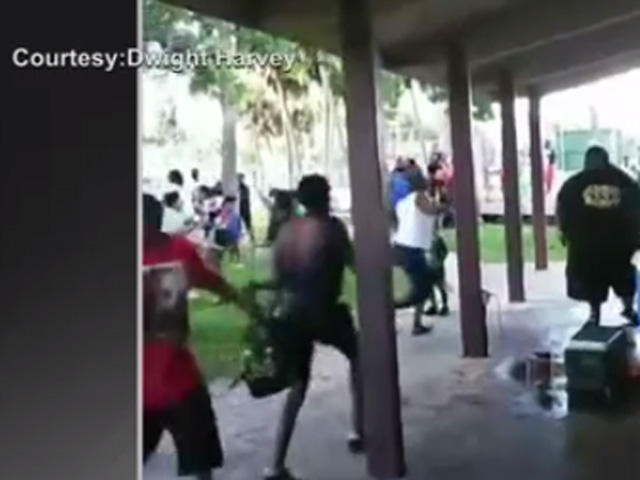 TITUSVILLE, Fla. -- Police here are calling the bystander who shot a gunman who opened fire at a park full of kids Saturday a "hero," reports CBS Orlando affiliate WKMG-TV. On Monday, police said they aren't releasing the names of those involved and said the man who returned fire on the suspect won't be facing charges.

"He's a hero," Titusville Police Sgt. Bill Amos said. "This park was filled with families and children and, at that time, it was an active shooter situation for him and he was trained enough to deal with it and he did."

Police said the incident started Saturday at around 5:30 p.m. when the accused gunman got into a fight at the Peace in the City rally at Issac Campbell Park. Amos said the fight started as a dispute over a basketball game.

The suspect then opened fire, Amos said. The shooting was caught on camera by DJ Dwight Harvey, who streamed the event on Facebook. In the video, children are seen running from bounce houses, screaming, losing their shoes as they ran.

Amos said that by confronting the gunman, the bystander saved lives, adding that the man had a concealed weapons permit.

The shooting happened at the Peace in the City rally, hosted by the family of Tony Butler, 38, who was found murdered in a burning car on July 9.

On Monday, Butler's aunt, Brenda Mayo, explained how painful it was for their family to have a shooting at an event she said was intended to bring peace to Titusville.

Like police, she said she is grateful for the bystander who stopped the shooter. Mayo said she knows him but for privacy reasons, would not name him.

"I thank God he was there, I hate he had to do that because I know it's bothering him, as well," Mayo said.

Titusville Police said Monday that the suspect is in critical condition.

They expect to release reports of the shooting and 911 calls later this week.