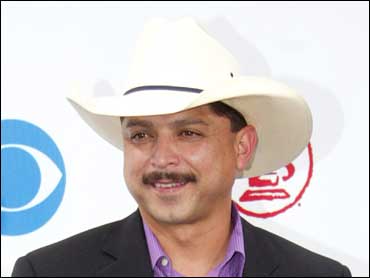 Grammy-winning Tejano singer Emilio Navaira, still recovering from major injuries suffered in a bus wreck six months ago, was back in the hospital Thursday after another traffic accident.

Emilio and wife Maria Navaira were in stable condition at University Hospital after their car and a truck collided Wednesday. Police believe Maria Navaira was driving at the time of the wreck, which did not injure the truck driver.

Emilio Navaira has been undergoing rehabilitation since wrecking his tour bus in suburban Houston in March. His agent, Joe Casias, says the couple was on the way back from rehab at the time of the latest wreck. He's been taking his rehab sessions in Houston until Hurricane Ike caused him and his wife to return home to San Antonio recently.

Emilio Navaira had a blood alcohol level of 0.19, more than twice the legal limit for driving, when he crashed his bus, according to police reports. Two of his bandmates have filed lawsuits against him over injuries they suffered.

After the accident, doctors performed two brain surgeries and repaired an aneurysm in the performer's right lung. His doctors had been encouraged by his quick recovery but have said it is difficult to determine whether he will recover fully.

Known to his fans simply as Emilio, has released more than a dozen albums with his band. He won a Grammy for best Tejano album in 2003 with "Acuerdate."

Magician-daredevil David Blaine says he's unhappy with how he ended his latest stunt: hanging upside-down without a net high over Central Park for 60 hours.

The 35-year-old endurance artist, who completed the stunt Wednesday night, expressed his disappointment in an appearance Thursday morning on "Live With Regis and Kelly."

"I had dreamed up the most amazing ending for a stunt ever," he said.

Blaine said his grand finale of diving from a platform 44 feet to the ground while attached to a harness didn't go according to plan. He was supposed to jump and, at 10 feet, be swept away by a bunch of helium-filled balloons.

Instead, he dangled awkwardly for a moment before disappearing in an ascent into the night sky.

Blaine said ABC, which aired the event in a two-hour special called "David Blaine: Dive of Death," had encouraged him not to dive because of high winds.

Blaine added: "I know that it didn't work right when all my friends called up and said, `Wait, what happened? I'm confused."'

Did his head feel heavy with blood during his upside-down act?

"In the beginning it did," he said. "At the end of the first day I thought I wasn't going to make it. I didn't know what I was going to do, but I didn't want to disappoint everybody, so I kept pushing and going as hard as I could."

Rapper Busta Rhymes was briefly detained at a London airport Thursday by immigration officers who said he should not be allowed into the country, a concert promoter said.

He was released, however, after a High Court judge ruled that Rhymes was entitled to either bail or immediate release while he formulated a defense. Justice Julian Flaux said it was "difficult to see upon what basis" Rhymes had been detained.

Flaux ordered a hearing for Rhymes' legal challenge to the government's attempt to keep him out of Britain. It will likely be held Friday afternoon.

Immigration officers at London City Airport said they refused Rhymes entry based on "unresolved convictions" in the United States, according to Orange RockCorps., the promoter of a Busta Rhymes charity concert in the British capital.

Rhymes, whose real name is Trevor George Smith Jr., had been scheduled to appear Friday at a charity concert in London's mammoth Royal Albert Hall. It was not immediately clear if he would do so.

RockCorps. said Rhymes had been allowed into Britain twice before this year.

A New York photographer is suing two others over Marilyn Monroe images.

Bert Stern says the photos were from a series of "unique and irreplaceable images" of the movie star that he took in July 1962 at the Bel Air Hotel in Los Angeles.

Manhattan court papers say Stern loaned them to the now-defunct Eros magazine, but they were not returned.

He says the photos are now held by Michael Weiss and Donald Penny.

Stern is seeking the photos, or at least $700,000 in repayment, plus $1 million in punitive damages and legal fees.

Messages left at Weiss' photography studio and at Penny's home were not immediately returned.

Johnny Cash Keeps The Hits Coming, Even After His Death

An unreleased recitation by Johnny Cash will be available as part of a new documentary examining Cash's views on America.

In "I Am The Nation," the deep-voiced singer personifies the country with references to important events and people in American history.

The recording was discovered in Cash's personal belongings after his death. It will be released as part of "Johnny Cash's America," a documentary airing Oct. 23 on the Biography Channel. The companion DVD/CD package on Legacy Recordings will be available Oct. 28.

In the film, Cash, who was outspoken on social issues, discusses the political process and the two parties.

The documentary is timed to the U.S. presidential election in November.

Latin singers Shakira and Alejandro Sanz urged the presidents of Mexico, Argentina, El Salvador, Panama and Paraguay on Wednesday to reach a regional accord to help poor children in Latin America.

Representing the Panama-based ALAS foundation, which works toward improving the education, health and nutrition of children up to six years old, Shakira warned that more than 50 percent of children in the region lack any kind of preschool learning or stimulation and never have a chance to escape poverty.

"He who is born poor dies poor" in her native Colombia, Shakira said, "and that must change."

About 32 million children are born into poverty in Latin America, according to ALAS, and lack the necessary education, stimulation and nourishment to develop properly.

The singers asked the presidents to adopt an agreement on combatting child poverty during the upcoming Iberoamerican Summit in late October.

"I promised Shakira that in the next summit, which is in El Salvador, we will work on the topic," Salvadoran President Tony Saca told a crowd of 1,000 at Colombia University in New York, where the presidents are visiting for the United Nations General Assembly.

The five leaders spoke of child poverty in their countries and expressed interest in the project - as well as admiration for the artists' work through ALAS.

ALAS was created in 2006 as an initiative by Shakira, Sanz and Spanish singer Miguel Bose. It is supported by Nobel Prize-winning novelist Gabriel Garcia Marquez and Mexican business mogul Carlos Slim.

MySpace is hoping to shake up the digital music scene.

The popular online hangout plans to flip the switch Thursday on a service that will give its roughly 120 million users free access to hundreds of thousands of songs from the world's largest recording labels.

But there's a catch.

The music can be played only on personal computers connected to the Internet and listeners have to tolerate advertising. Anyone who wants to transfer a song to a portable device like Apple's iPod will have to buy the music through Amazon.com's year-old downloading service, which sells songs for as little as 79 cents apiece.

Unlike much of the material at Apple's iTunes store, the music sold through MySpace's new service won't contain the protections that limit how many times a track can be copied. AP-Michael Douglas

Actor Michael Douglas is urging the United States and eight other holdout nations to ratify a nuclear test ban treaty.

And he tried to focus on that subject at a U.N. news conference today.

But reporters started to pepper him with questions about the financial turmoil shaking world markets, recalling his role in the 1987 film "Wall Street." Douglas won an Academy Award for portraying the rapacious investor Gordon Gekko, who popularized the phrase "greed is good" in the movie.

After world leaders condemned the "boundless greed" of world markets at the U.N., Douglas was asked to compare nuclear Armageddon with the "financial Armageddon on Wall Street."

But he reminded reporters that Gekko was just a character he played 20 years ago.