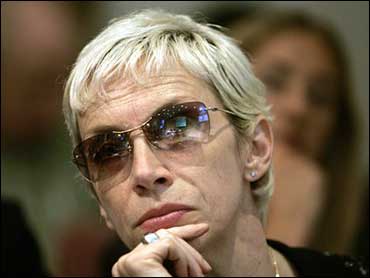 Annie Lennox is recovering at her London home after having spinal surgery to release an impinged nerve, according to her representatives.

The singer-songwriter underwent an operation Friday following a painful back spasm she suffered while attending the international AIDS conference in Mexico City as an ambassador for Oxfam, according to a statement released by her management and record label Monday.

"The surgery went as planned, and Annie is now recuperating at home," it read. "Annie would like to send her thanks and appreciation to all that have sent their well wishes in the past few days."

Lennox, 53, has blogged about her situation on her Web site.

In an Aug. 10 post from her hotel room in Mexico City, Lennox wrote: "I should have been attending the final press blitz of the week, but my back suddenly went into spasm last night, giving me more pain that I've ever experienced in my life, and a totally numb left foot!!"

A day later, bedridden and back in the United Kingdom, she joked: "I'm going to have to get myself a crutch and a parrot, so I can fob myself off as a pirate and scare the neighborhood preschoolers! Just kidding folks!"

Lennox recently launched a campaign called "Sing", which includes a song she recorded with 23 female singers, including Madonna, to raise money for AIDS.

Her upcoming greatest-hits album "The Annie Lennox Collection" was originally scheduled to be released Sept. 16, but has been postponed until spring so Lennox will be able to promote it following a full recovery.

Many Line Up For Isaac Hayes Tribute

A line of several dozen people stood waiting to get into Hope Presbyterian Church in Cordova near Memphis for Monday's service.

Hayes died August 10 after he was found unconscious at his Memphis residence. No autopsy was performed, but paperwork filed by the family physician lists the cause of death as a stroke.

She's putting people on notice after John Rich implied Johnny Cash would have backed John McCain. She writes on her Web site that "it's appalling" that people want to use her father's name "to ascribe beliefs, ideals, values and loyalties to him that cannot possibly be determined, and to try to further their own agendas by doing so."

The Washington Post reports that at a pro-McCain concert earlier this month, Rich declared: "I'm sure Johnny Cash would have been a John McCain supporter if he was still around," before he played Cash's "Walk the Line." Rosanne Cash says she knew her father pretty well and that "even I would not presume to say publicly what I 'know' he thought or felt." She says, "It is unfair and presumptuous to use him to bolster any platform."

Tom Hanks still feels a responsibility to the Ohio theater troupe that gave him an early break and will help with a major fundraising campaign.

Maybe that's only fitting, since Hanks says the Great Lakes Theater Festival taught him an important lesson in responsibility as an actor. The 52-year-old Oscar winner says he learned that you have to show up prepared, knowing your lines and what the scene is about.

Hanks has signed on as the public face of an effort to raise the last $3.6 million needed to provide the Great Lakes with a new home. The historic Hanna Theatre at Cleveland's Playhouse Square is being renovated into a state-of-the-art facility.

It will be a long way from Lakewood High School, where Hanks performed with the theater company in 1977.

CBS said that Fishburne will be introduced in the ninth episode of the upcoming season. He plays a college lecturer and former pathologist who is focused on why people commit acts of violence.

Petersen, who has been with the series since it debuted in fall 2000, will leave the show early next year. CBS says the air date for Petersen's final episode hasn't been determined.

The most memorable moments in television history will be revealed during the 60th Primetime Emmy Awards next month, and it's up to voters to decide which bits should take top honors.

Forty "moments" - 20 dramatic and 20 comedic - are in the running. Comedy contenders include "M-A-S-H," "Mork & Mindy," "Sex and the City" and "The Cosby Show," while "Buffy the Vampire Slayer," "Miami Vice," "Moonlighting" and "The Sopranos" are among the drama candidates.

The television academy and Emmy show producers came up with the competition and the contenders in honor of the 60th annual presentation of the Emmy Awards.

"It's a perfect opportunity both to celebrate the history of television and at the same time introduce new generations to some of the medium's most important events," Emmys executive producer Ken Ehrlich said in a statement Monday.

Fans can watch clips and vote for their favorite moments online until Sept. 15.

The top five vote-getters in each category will be presented during the Emmy show on Sept. 21, and the two winning moments will be revealed just before the year's outstanding drama and comedy series are named.

Authorities say Hollywood producer and talent manager Joan Hyler was in critical condition after she was hit by a car Friday night on Pacific Coast Highway in Malibu, Calif.

Hyler, who has represented Bob Dylan and Madonna and is a former president of the nonprofit Women in Film, was hit as she was heading to a home in the area.

In a posting on the Web site of UCLA Medical Center, her family says she sustained "severe and multiple injuries."

Opera-lovers in Belgium and France will be able to watch the New York Met's entire season live on movie screens, a Belgian cinema group said Monday.

"This time, all Belgian and French Kinepolis screens will show the entire Met season ... that runs from October through May 2009," the company said.

Met operas are usually performed Saturday afternoons in New York, enabling Kinepolis to show them live on its screens in the evening. They will be shown with subtitles in English or French.

The first opera - on Oct. 11 - will be Salome, by Richard Strauss, starring Finnish soprano Karita Mattila. Also on the 2008-2009 program are operas by Hector Berlioz, Giacomo Puccini, Gaetano Donizetti and Gioachino Rossini.