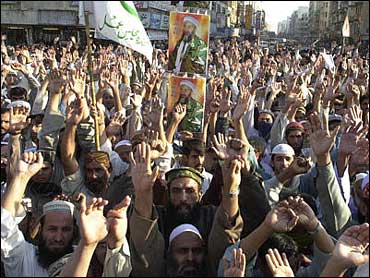 Haffan al-Hashim, of Middle Eastern origin, was arrested along with a satellite telephone, a laptop computer and six discs that intelligence sources said contained information about other operatives.

Al-Hashim was en route from Hyderabad to Karachi, 60 miles away, when the arrest was made, intelligence officials said on condition of anonymity.

There was no indication of how significant al-Hashim was in the al Qaeda network.

Authorities were monitoring traffic leaving Hyderabad after a raid at the address where the call was made failed to net al-Hashim, the official said.

He declined to give further details or say whether the call was connected to this week's deadly car bombings in Saudi Arabia. Saudi officials have suggested al Qaeda was behind that attack.

Most of the arrests of senior al Qaeda men have taken place in Pakistan, where they sought refuge following the 2001 U.S.-led war on terror next door in Afghanistan.

No one claimed responsibility for Thursday's attacks in Karachi, but law enforcement officials who have raided militant organizations have seized maps of Karachi with Shell stations marked as possible targets.

Police spokesman Malik Sheikh said two men on a motorcycle went from one station to the next before dawn, placing small explosive devices in garbage cans.

"They were are all Shell pumps that were targeted," Police Chief Kamal Shah said, adding that additional security had been deployed to several foreign-based businesses.

Royal Dutch-Shell Group is a British-Dutch firm based in London, but like many Western-owned businesses in Pakistan, it is frequently mistaken for a U.S. company.

Police said one of the explosions, in Karachi's posh Clifton neighborhood, was caused by a homemade device with a timer. The devices were small and crude. Police said they were still investigating the attacks.

"It is a message that Shell pumps will always be on the hit list because of being a foreign company," Shah said.

Militant Islamic groups angered by Pakistan's support for the U.S.-led war in Afghanistan have launched a series of anti-Western attacks over the past 18 months.

Western interests have been targeted several times in Karachi, including an explosion last year outside the U.S. Consulate that killed 17 people and a suicide bombing that killed 11 French engineers outside their hotel. Wall Street Journal reporter Daniel Pearl was killed after being kidnapped in Karachi.

Remnants of the Taliban and al Qaeda are believed to have hidden in Pakistan's remote and lawless Northwest Frontier Province after the U.S.-led war drove them out of Afghanistan in 2001 and early 2002.