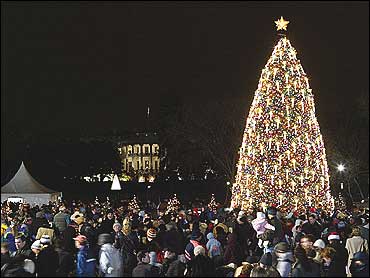 Lighting the national Christmas tree Thursday, President Bush urged American troops who will be far from home and family these holidays to take some solace in the Christmas story and the nation's gratitude.

"Separation from loved ones is especially difficult this time of year," Bush said at the 80th annual outdoor "Pageant of Peace" ceremony on the Ellipse. "People in uniform can know that their families miss them and love them, that millions are praying for them, and that America is grateful for the men and women who serve and defend our country."

Before a crowd of thousands that included Iraq war wounded, the president said the story of Jesus Christ's birth and life can bring comfort and provide "a light than can guide us still."

As a light snow fell intermittently, Bush and his wife, Laura, listened to a slew of performers singing holiday songs before flicking the switch that enveloped the 40-foot Colorado blue spruce in a blaze of light.

It took 70,000 lights and many months of work to get the White House ready for the 37,000 visitors expected this holiday season. Not to mention 19 Christmas trees, 660 feet of garlands, 245 wreaths, 125 pounds of chocolate, two antique sleighs, 251 bows and 45 volunteer workers.

All this to transform rooms from their everyday grand to the holiday magical, decked in sparkling, elegant red decorations amid a storytelling theme that has favorite children's book characters popping out of every corner.

The almost nightly celebrations got under way Wednesday, with the first two of 17 holiday receptions at the White House, honoring the decorators and supporters from the states. About 7,000 guests are expected at these parties, plus thousands more ordinary citizens on public tours.

The White House foyer was adorned with four giant nutcrackers, garlands of red, glitter-covered balls draped generously around doorways, sconces and mantles, and floor-to-ceiling "trees" made of poinsettias — a grand first impression.

Throughout the executive mansion's public rooms appear 43 ' replicas of beloved characters from children's stories. The girls of "Little Women" sit atop one East Room mantle, while Harry Potter and his Hogwarts School of Witchcraft and Wizardry adorn another across the room. The "Goodnight Moon" room familiar to many modern parents can be spied through a gingerbread house window, while tea party participants from "Alice's Adventures in Wonderland" form the State Dining Room table's centerpiece.

The books themselves are arrayed under the official White House Christmas tree, a Fraser fir from Wisconsin that brushes the Blue Room's ceiling. On its branches hang dolls also depicting literary figures — ornaments that were created in 1989 for the first Christmas that President Bush's father was in the White House and borrowed by Mrs. Bush from his library.

"I hope people will have a really good time seeing and looking for their favorite storybook characters," said Mrs. Bush, dressed in a fire-engine red boucle suit from Escada. "I picked books that were important to me."

Pastry chef Roland Mesnier took some liberties in crafting, for the 25th year, the traditional gingerbread house, usually a White House made to scale. This year he "cheated a little bit," making the house taller to accommodate 60 marzipan figurines, including Jack and his Beanstalk climbing up one side and Humpty Dumpty hanging off a second-floor balcony.

The East Room table centerpiece — a chocolate replica of Willy Wonka's factory from Roald Dahl's "Charlie and the Chocolate Factory" — may be Mesnier's most complicated undertaking yet, requiring 250 hours of work that started last summer. Inspired by watching the movie and reading the book, Mesnier crafted factory workers from painted blown sugar, added bubble gum balls for effect and molded chocolate around "whatever I could find," including a piece of clothes dryer piping, a flower pot and a toy tire.