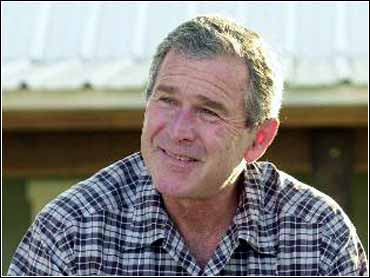 Gov. George W. Bush got a CIA briefing in the seclusion of his ranch retreat on Saturday, calling it an important part of preparing for the White House and adding: "I've got a good chance to win the election."

Bush said his aides, Condoleezza Rice, Paul Wolfowitz and Josh Bolten, had security clearances for the classified briefing. "My clearance is the clearance from the American people," Bush said. "At least the Republicans."

The tradition of briefing nominees dates from the 1952 campaign, when Harry S. Truman saw to it that his would-be successors did not come to office as he did, when as vice president he succeeded Franklin D. Roosevelt in 1945 without knowledge of his own administration's intelligence secrets, even the atomic bomb project.
The Republican presidential nominee thanked the Clinton administration - his campaign target on other days - for "following the tradition of briefing a candidate," to help prepare him for office.
The briefing has special poignance for Bush, who has been under media scrutiny since he failed a foreign policy quiz on WHDH-TV in Boston in November of last year. Despite that gaffe and his recent lag in polls, Bush doesn't seem to be worried.

"I feel I'm right where I need to be going into Labor Day," he said.

But Bush acknowledges that it will be a close contest. "It's going to be a great race coming down the stretch. I like the feel of it," he said at his ranch Saturday.

"I feel we are in good shape," Bush said during a campaign run through Loiusiana and Arkansas. "Not only do I feel we're in good shape, but I look at the polls. I feel our team is unified and enthused and I'm very pleased about where we are in the campaign."

But by Friday evening, after a Newsweek poll showed Democrat Al Gore leading Bush by 12 points in a two-way race, the Bush campaign said what all campaigns say when faced with negative numbers: The polls don't matter.

"This particular poll has had us behind for a long time," said Bush spokeswoman Mindy Tucker. "I'm not sure how accurate it is. It tends to overweigh Democrats."

The negative numbers came after a week in which the Bush campaign felt it was getting back on track, pushing Bush's agenda of education and tax cuts, and even going on the offensive, approving a tough new anti-Gore ad that dredged up the vice president's past fund-raising troubles.
Democrats called the ad desperate and negative. Bush called it factual and funny.

"I don't think this is mean and ugly," Bush said. "I think it is tongue-in-cheek use of the man's own words. I also said loud and clear in the campaign that I'm going to defend myself."

It's a road-tested Bush strategy: The candidate rides the high road, while surrogates deliver the body blows. It worked to great effect against John McCain in the South Carolina primary.

But Doug Bailey, of the political journal HotLine, said Bush is playing a dangerous game. "This is really a quite negative spot that is quite risky," he said, "particularly because these people just got to know him and liked him."

Karl Rove, Bush's chief strategist, insists the GOP campaign is where he and the governor expected it to be at Labor Day.

"We're not doing anything different," Rove said. "This is going to be a tight race. So what's new?"

Bush was campaigning on Friday in Lafayette and Texarkana, Ark., concentrating on the education issue that has been his chosen topic during a week of campaign distractions, including a ruling by a federal judge demanding improvements in his state's handling of medical benefits for low income children.

Rove, political director for Bush, acknowledged that Gore has gained since the Democratic National Convention two weeks ago. "Look, there's a campaign ebb and flow and this guy's had a couple of good weeks," he said in an interview on Thursday.

The close race could add up to an election that will turn on organization and party efforts to turn out their voters, especially in the swing states of the Midwest, Rove said. He said the Bush campaign is geared up to do that.

Rove said he isn't concerned about voter judgments of Bush based on critiques and TV jokes over words he mispronounces or misuses, or over the limited pace of his personal campaigning so far.

"He wouldn't be where he is if people did not think he was up to the job," Rove said. He said they will have ample opportunity to judge him for themselves because Bush will be campaigning more aggressively after Labor Day.