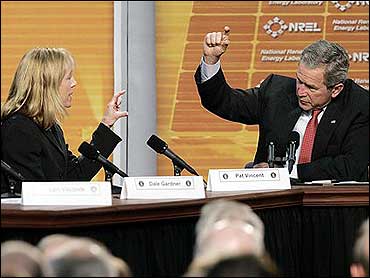 President Bush on Tuesday acknowledged that Washington has sent "mixed signals" to one of the nation's premiere labs studying renewable energies — by first laying off, then reinstating, 32 workers just before his visit.

The president blamed the conflicting message on an appropriations mix-up in funding the Energy Department's National Renewable Energy Laboratory, which is developing the very renewable energy technologies the president is promoting.

"I recognize that there has been some interesting — let me say — mixed signals when it comes to funding," Bush said. "The issue, of course, is whether good intentions are met with actual dollars spent.

"Part of the issue we face, unfortunately, is that sometimes decisions made as the result of the appropriations process, may not end going to where it was supposed to have gone.

"We want you to know how important your work is," he said. "We appreciate what you're doing."

Two weeks ago, 32 workers, including eight researchers, were laid off at the lab.

Then, over the weekend, just before Bush's planned visit, the government restored the jobs.

His trip to the renewable energy laboratory is part of a two-day, three-state trip to promote the energy proposals Bush outlined in his State of the Union address.

At the direction of Energy DepartmentSecretary Samuel Bodman, $5 million was transferred to the Midwest Research Institute, the operating contractor for the lab, to get the workers back on the job, the Energy Department announced Monday.

Philip Clapp, president of the National Environmental Trust, said the decision restores only $5 million of the $28 million budget shortfall at the lab that forced the layoffs.

"The $5 million stopped the bodies from going out the door, but it doesn't provide the money for the (renewable energy) programs," Clapp said.

At the lab, where Bush was holding a panel discussion of his energy initiatives, the president saw tanks where agricultural waste is fermented into ethanol. He was shown samples of polar, switchgrass and corn stalks — material the lab is studying in hopes of developing a cost-effective way to use it to make ethanol.

"You're doing great work here," said Bush, who picked up a bottle of clear-colored ethanol and smelled it.

The president has proposed a 22 percent increase in funding for clean-energy technology research at the Energy Department. He wants to change the way the nation fuels its vehicles and powers homes and businesses by focusing on nuclear, solar and wind power as well as better batteries to power hybrid-electric autos.

"Some of the nations we rely on for oil have unstable governments, or fundamental differences with the United States," Bush said. "These countries know we need their oil and that reduces influence. It creates a national security issue when we're held hostage for energy by foreign nations that may not like us."

Lab employee Tina Larney said that even though the jobs are being reinstated, she still questions the government's resolve in finding alternative energy sources.

"There is technology available now, there is the know-how now," Larney said. "What is lacking is leadership on the large scale at the national level."

The White House says Bush is providing that leadership. They say he wants to invest more in zero-emission, coal-fired plants, as well as support solar and wind research, promote cars that run on hydrogen, encourage more nuclear power plant construction and fund work to produce ethanol — not just from corn, but from wood chips and switch grass.

Critics of the Bush administration are skeptical of Bush's energy proposals.

Rep. Mark Udall, D-Colo., co-chairman of the House Renewable Energy and Energy Efficiency Caucus, said the government has funded only one-third of the money the 2005 energy bill authorized for renewable energy and energy efficiency.

Clapp claims the president is promoting renewables because polls show his job approval numbers are being weighed down by Americans' concerns about high utility bills this winter and the cost of gasoline at the pump.