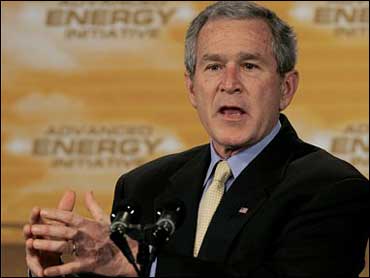 Saying the nation is on the verge of technological breakthroughs that would "startle" most Americans, President Bush on Monday outlined his energy proposals to help wean the country off foreign oil.

The same day, oil prices rose more than $1.50 a barrel in response to violent militant action against oil pipelines in the Niger Delta that led to a 20 percent cut to Nigeria's oil production.

Militants attacked a Shell-oil operated oil pipeline switching station and a boat, vowing to spread their campaign across the petroleum-rich south from where most of the African oil giant's crude is pumped. The group took nine foreign oil workers hostage over the weekend.

Less than half the crude oil used by refineries is produced in the United States, while 60 percent comes from foreign nations, Mr. Bush said during the first stop on a two-day trip to talk about energy.

Some of these foreign suppliers have "unstable" governments that have fundamental differences with America, he said.

"It creates a national security issue and we're held hostage for energy by foreign nations that may not like us," Bush said.

Mr. Bush is focusing on energy at a time when Americans are paying high power bills to heat their homes this winter and have only recently seen a decrease in gasoline prices.

One of Mr. Bush's proposals would expand research into smaller, longer-lasting batteries for electric-gas hybrid cars, including plug-ins. He highlighted that initiative with a visit Monday to the battery center at Milwaukee-based auto-parts supplier Johnson Controls Inc.

During his trip, Mr. Bush is also focusing on a proposal to increase investment in development of clean electric power sources, and proposals to speed the development of biofuels such as "cellulosic" ethanol made from wood chips or sawgrass.

Energy conservation groups and environmentalists say they're pleased that the president, a former oil man in Texas, is stressing alternative sources of energy, but they contend his proposals don't go far enough. They say the administration must consider greater fuel-efficiency standards for cars, and some economists believe it's best to increase the gas tax to force consumers to change their driving habits.

While Mr. Bush is highlighting his budget proposals to help wean America from foreign oil, the lab he visited is meeting a $28 million shortfall by cutting its staff by 32 people, including eight researchers.

"Our nation is on the threshold of new energy technology that I think will startle the American people," Mr. Bush said. "We're on the edge of some amazing breakthroughs — breakthroughs all aimed at enhancing our national security and our economic security and the quality of life of the folks who live here in the United States."

"Roof makers will one day be able to make a solar roof that protects you from the elements and at the same time, powers your house," Mr. Bush said. "The vision is this — that technology will become so efficient that you'll become a little power generator in hour home. and if you don't use the energy you generate you'll be able to feed it back into the electricity grid."

"This single tax subsidy dwarfs anything being done for hybrid batteries," Markey said in a news release.

On Tuesday, Mr. Bush plans to visit the Energy Department's National Renewable Energy Laboratory in Golden, Colo., to talk about speeding the development of biofuels.

As a complement to Mr. Bush's travels, six Cabinet officials are crisscrossing the nation this week, appearing at more than two dozen energy events in more than a dozen states.