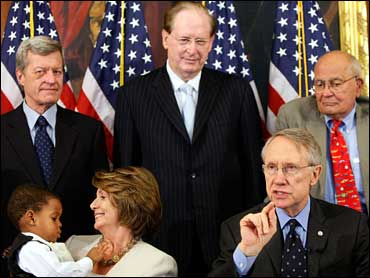 President Bush insisted to House Speaker Nancy Pelosi Friday that he's going ahead with his promised veto of a major expansion of a children's health program despite its overwhelming approval by Congress.

Pelosi, D-Calif., said she told Bush in a morning phone call that she was praying he would change his mind. "I think I have to pray a little harder," she told reporters moments later, at a Capitol ceremony where Democrats celebrated passage of the proposed $35 billion increase in the State Children's Health Insurance Program.

It's doubtful that any new arguments were made in what Pelosi called "a friendly friendly conversation." She said she reminded Bush that many Republicans voted to raise tobacco taxes to fund a program expansion, and that many governors from both parties support it.

"He said he liked people who don't give up," Pelosi said, but he also made it clear he is not backing down.

"The president has been very clear for months that if the bill came to him in its current form that he would veto it," Perino said.

She added: "What he did say is, `I'm going to veto this bill, and after that, let's see if we can sit down and come to a compromise.' "

Congress and Bush have agreed to fund SCHIP, at its current level, at least through mid-November.

Eighteen Republicans joined a solid Democratic block Thursday when the Senate voted 67-29 for the $35 billion expansion. The House passed the bill Tuesday, 265-159, with 45 Republicans voting for it.

A veto override requires a two-thirds majority vote in both chambers, a threshold that Republicans say they can prevent in the House. Bush is likely to receive the legislation next week, lawmakers said.

Bush has proposed a $5 billion increase in SCHIP, which now covers 6.6 children from modest-income families that are not poor enough to qualify for Medicaid. The bill approved this week by Congress, he says, is too costly, goes beyond the program's original intent, and shifts too much insurance burden on the government rather than private providers.

Analysts say the legislation would allow about 4 million of the estimated 9 million uninsured children in the United States to gain coverage.

Democrats feel the SCHIP program is popular, and sense a political blunder on the part of Bush and his congressional allies. Friday's Democratic event, which included Senate Majority Leader Harry Reid, D-Nev., featured several small children whose families have relied on SCHIP for medical coverage.

Cameras clicked and whirred as Pelosi briefly held a small boy, and his Elmo doll, on her lap. She said there "are 10 million reasons" for Bush to sign the bill, citing the number of children the proposed expansion would cover.