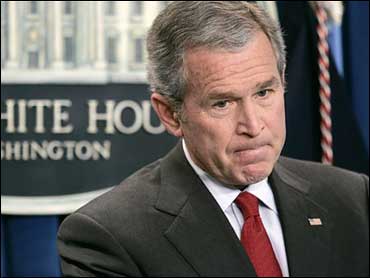 President Bush made it clear Tuesday that there will be American troops in Iraq when he leaves office and it will be his successor's job to bring them home.

In response to a question in a White House news conference about if there will come a day that when there will be no American forces in Iraq, Mr. Bush answered, "That, of course, is an objective. And that will be decided by future presidents and future governments of Iraq."

President Bush stepped up his defense of his Iraq strategy Tuesday, reporters that despite ongoing violence he remains confident of victory.

Mr. Bush said there will be "more tough fighting ahead" in Iraq, but denied claims that the nation is in the grips of a civil war three years after the U.S.-led invasion.

CBS News correspondent Gloria Borger reports both Republicans and Democrats in Congress have sent a strong signal to the White House that it was time for an exit strategy, but that Tuesday it did not sound as if the president was providing one.

Acknowledging the public's growing unease with the Iraq war and election-year skittishness among fellow Republicans, the president nonetheless vowed to keep U.S. soldiers in the fight.

"If I didn't believe we could succeed, I wouldn't be there. I wouldn't put those kids there," Mr. Bush declared at the hour-long news conference in the White House briefing room.

CBS News chief White House correspondent Jim Axelrod reports that even while recognizing public concern, this was a president who was projecting no doubts of his own. He stood by embattled Secretary of Defense Donald H. Rumsfeld.

"I don't believe he should resign. He's done a fine job. Every war plan looks good on paper until you meet the enemy," he said.

Also Tuesday, Vice President Dick Cheney accused some Bush administration critics of being too quick to argue that the Iraq war cannot be won and of underestimating a continuing threat of terrorist attacks.

Part of a broad effort to counter polls that show waning public support for the war and for President Bush personally, Cheney emphasized what the administration has said is underreported evidence of improvement in Iraq. He also took on those who have been questioning Bush's approach in the three-year-old war.

"A few seem almost eager to conclude that the whole struggle is already lost," Cheney told an enthusiastic military audience, from a stage bedecked with flags and camouflage netting. "But they're wrong."

He said that "the only way to lose" in Iraq is to quit. "That is not an option."

Mr. Bush scoffed at a question suggesting he should reshuffle or shake up his White House staff to help raise his sagging poll standings. But he did hint that he might bring in an experienced Washington insider to work with a disgruntled Congress.

"I'm not going to announce it right now," Mr. Bush said, adding that he's satisfied with the staff he's surrounded himself with.

"What he did was boost the morale of his staff today," she said. "But he didn't' rule out staff changes in the near future."

The president's second full-blown news conference of 2006 was part of an ongoing call for public patience with the Iraq war now into a fourth year. The White House is trying to counter critics of the war policy as it responds to polls showing sagging support for the war.

In an opening statement, Mr. Bush said that despite continued violence in Iraq, "We're making progress and that's important for the American people to understand."

He also touted a new report showing a dramatic drop in wholesale inflation.

"Productivity is strong. Inflation is contained. Household net worth is at an all-time high," Mr. Bush said, crediting his administration's policies.

"Nobody likes war. It creates a sense of uncertainty in the country," he said. "War creates trauma."

The public's support for the war and the president himself has declined dramatically in recent months, jeopardizing his second-term agenda. "I'd say I'm spending that capital on the war," Mr. Bush said when asked about the political capital he carried out of the 2004 re-electon campaign.

When asked about his failed Social Security plan, he simply said: "It didn't get done." But he defiantly defended his warrantless eavesdropping program, and baited Democrats who suggest that he broke the law.

Calling a censure resolution "needless partisanship," Mr. Bush challenged Democrats to go into the November midterm elections in opposition to eavesdropping on suspected terrorists. "They ought to stand up and say, 'The tools we're using to protect the American people should not be used,'" he said.

The president said he did not agree with former interim Iraqi Prime Minister Ayad Allawi, who told the British Broadcasting Corporation Sunday, "If this is not civil war, then God knows what civil war is."

Mr. Bush said others inside and outside Iraq think the nation has stopped short of civil war. "There are other voices coming out of Iraq, by the way, other than Mr. Allawi, who I know by the way — like. A good fellow."

"We all recognized that there is violence, that there is sectarian violence. But the way I look at the situation is the Iraqis looked and decided not to go into civil war."

However, CBS News correspondent Lara Logan reports the threat of civil war is ongoing, and that the Iraqis she talks to think that it might take just one more horrific incident to tip the scales.

More than seven in 10 Americans – majorities of both Democrats and Republicans – say a civil war is currently going on in Iraq, according to the latest CBS News poll, while another 13 percent think civil war is likely to break out in the near future.

Mr. Bush said he agreed to U.S. talks with Iran to underscore his point that Tehran's attempts to spread sectarian violence or provide support to Iraqi insurgents was unacceptable to the United States.

On Iraq, Mr. Bush bristled at a suggested that he wanted to wage war against that country since early in his presidency.

"I didn't want war. To assume I wanted war is just flat wrong ... with all due respect," he told a reporter. "No president wants war." To those who say otherwise, "it's simply not true," Mr. Bush said.

More than 2,300 Americans have died in three years of war in Iraq. Polls show the public's support of the war and Mr. Bush himself have dramatically declined in recent months.

Mr. Bush acknowledged that Republicans are worried about their political standing in November. "There's a certain unease as you head into an election year," he said.

Asked about former supporters who now oppose him and the war, Mr. Bush said he's trying to win them over by "talking realistically to people" about the war and its importance to the nation.