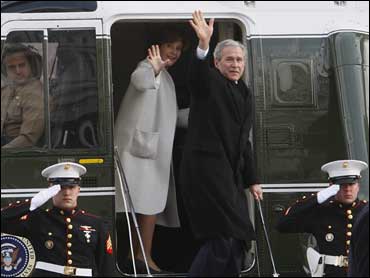 (AP)
Less than two hours into his new life as a private citizen, former President Bush boarded a helicopter from Washington D.C. following a handshake and hug from President Barack Obama.

Vice President Joe Biden saluted the helicopter as it took off.

Mr. Bush headed for Andrews Air Force Base, where he arrived a short time ago. As the Associated Press reports, his helicopter passed over the masses of supporters of Mr. Obama who came to Washington to celebrate the new president's inauguration.

Some in that crowd booed when Mr. Bush appeared on the big screens positioned on The Mall during the inauguration ceremony, the AP notes. There was cheering when a broadcaster announced that Mr. Bush is no longer president, and some chanted "Na-na-na-nah, hey, hey, hey, goodbye."

Mr. Bush met with supporters and staffers to say his final goodbyes at Andrews Air Force Base, reports CBS News correspondent Jim Axelrod. Former Vice President Dick Cheney, who is in a wheelchair after straining his back during a move, was also present.

From Andrews, Mr. Bush will fly with family and friends to Midland, Texas, where thousands are expected to greet him. He will then fly to Waco, Texas, and from there head to his ranch in Crawford.

this video
of his conversation with Katie Couric.