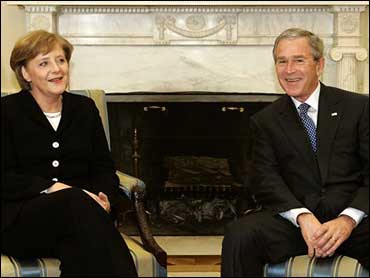 At a joint White House news conference, President Bush rejected a plea by German Chancellor Angela Merkel that the U.S. prison camp at Guantanamo Bay, Cuba, be shut down. He called the four-year-old camp "a necessary part of protecting the American people."

It was one of the few disagreements the two leaders voiced after their White House meeting. It was the German leader's first visit to the United States since taking office last November.

On Guantanamo, Merkel said she raised the issue with Mr. Bush, and she described it as one of the differences between the United States and Germany. Germany opposed the war in Iraq.

"There sometimes have been differences of opinion. I mentioned Guantanamo in this respect," Merkel said.

Mr. Bush said, "I can understand why she brought it up because there's some misperceptions about Guantanamo."

He disputed reports that detainees there have been mistreated.

Mr. Bush said the prison camp would remain open "so long as the war on terror goes on, and so long as there's a threat."

Ultimately, the U.S. courts will have to decide whether terror suspects can be detained in Guantanamo or must be processed through the U.S. judicial system, he said.

The pair stood together Friday in

urging U.N. intervention if Iran (video)
does not retreat from a resumption of its nuclear program.

The world needs to "send a common message to Iran that their behavior ... is unacceptable," Mr. Bush said.

Merkel used similar words, and she also condemned statements by Iran's leader challenging Israel's right to exist. "We will not be intimidated by a country such as Iran," she said.

Taking the matter to the Security Council, as Germany, France and Britain recommended on Thursday, is the logical next step, Mr. Bush said.

"We want an end result to be acceptable, which will yield peace, which is that the Iranians not have a nuclear weapon in which to blackmail and-or threaten the world," Mr. Bush said.

On another subject, Mr. Bush said he had "no idea" about the possible truth of reports that German intelligence agents actively helped U.S. forces in Iraq at the start of the war.

It was a reference to German television and newspaper reports that the government of then-Chancellor Gerhard Schroeder, an outspoken opponent of the war, helped identify a bombing target in Iraq.

Germany's Federal Intelligence Agency said the reports were "wrong and distorted," although it did confirm that it had two agents in Iraq before and during the war.

"You did say 'secret intelligence,' right?" Mr. Bush said to the German reporter who asked the question. "The chancellor brought this up this morning, I had no idea what she was talking about. First I heard of it was this morning, truthfully."

On Thursday, Germany, Britain and France, backed by the United States, said talks with Iran had reached a dead end and urged that the issue be referred to the Security Council.

What kind of sanctions the council might consider remained in dispute.

Both Mr. Bush and Merkel said they discussed Iran at length.

In two years of difficult negotiations between European nations and Iran, "Iran refused every offer we made," Merkel said.

"It's very important for non-transparent societies to not have the capacity to blackmail free societies," Mr. Bush asserted.

Mr. Bush jokingly likened that race, which took almost two months to resolve, to his own victory in 2000 over Democrat Al Gore, which was decided only after weeks of suspense by a Supreme Court decision.

She and her sizable entourage walked through the White House gates trailed by empty black limousines and a fleet of silver German-made BMWs.

Schroeder's opposition to the U.S.-led war that deposed Iraqi President Saddam Hussein so damaged the German's relationship with Mr. Bush that the president refused at times to speak to Schroeder on the telephone.

Merkel, by contrast, is more in tune with Mr. Bush's conservative politics.

Merkel also was to meet with members of Congress and planned to attend a ceremony at the newly renovated headquarters of the German Marshall Fund of the United States.

Despite her calls for a partnership with Washington, she has demonstrated a strong streak of independence, including her criticism of the Guantanamo Bay camp.

Germany rebuffed an appeal by Attorney General Alberto Gonzales not to release a terrorist accused of killing a Navy diver in a 1985 airplane hijacking.