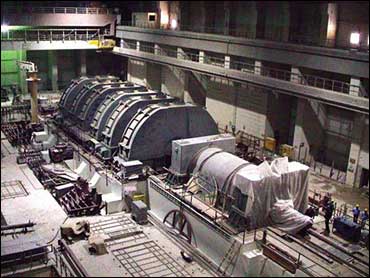 Iran threatened on Friday to block inspections of its nuclear sites if U.N. Security Council confronts it over its nuclear activities.

Germany, Britain and France said Thursday that nuclear talks with Iran had reached a dead end after more than two years of acrimonious negotiations and the issue should be referred to the Security Council.

However, the Europeans held back from calling on the 15-nation council to impose sanctions and said they remained open to more talks.

France said Friday that it favors a step-by-step approach with Iran over its nuclear program and that any sanctions request at this stage would be premature.

"We, like our partners, like the British and the Germans, consider that this co-request for sanctions is premature for the moment," Foreign Ministry spokesman Jean-Baptiste Mattei said.

Iran said that if it were confronted by the council, it would be obliged to stop cooperating with the U.N. nuclear watchdog, the International Atomic Energy Agency.

That would be, among other things, the end of random inspections, said Foreign Minister Manouchehr Mottaki.

"In case Iran is referred to the U.N. Security Council ..., the government will be obliged to end all of its voluntary cooperation," the television quoted Mottaki as saying.

Germany said Friday that talk of sanctions against Iran is "premature" until there are talks with other countries whose support would be needed for any U.N. measures.

Asked whether economic sanctions or specific resolutions against Tehran are currently an issue, Foreign Ministry spokesman Martin Jaeger told reporters: "We believe that is premature at the moment."

"I can say again in all clarity for the (German) government that we are counting on diplomatic means in dealing with Iran," Jaeger added.

The issue will be on the table when President Bush meets at the White House Friday morning with new German Chancellor Angela Merkel, reports CBS News correspondent Peter Maer.

Iran has been voluntarily allowing short-notice IAEA inspections since 2003. But last year it adopted a law requiring the government to block intrusive inspections of Iran's facilities if the IAEA refers the Iranian program to the council.

The law also requires the Iranian government to resume all nuclear activities that it had stopped voluntarily, foremost among them enriching uranium.

Secretary of State Condoleezza Rice also said a "strong message" had to be sent to Tehran but said she was not ready to talk about what action should be taken to curtail Iran's nuclear ambitions.

"I think we have an Iranian regime that is determined to be on the wrong side of the international community and I think they're going to have to bear the consequences of that," Rice told CBS News Chief White House correspondent John Roberts.

"This must be about nuclear weapons," Rice said "Let's say they wanted civilian nuclear power. They had every chance to have it without the kind of proliferation risk that the world is unwilling to take."

British Foreign Secretary Jack Straw said he also had "strong suspicion" that Iran wanted to build a nuclear bomb but stressed that there was no categorical evidence to prove that.

"To quote the White House, 'Iran is not Iraq,'" Straw said in an interview Friday with the British Broadcasting Corp.

He added that while Iran could face Security Council sanctions for resuming its nuclear activities, military action is not being considered.

"This can only be resolved by peaceful means. Nobody is talking about invading Iran or taking military action," he said.

The calls to refer Iran to Security Council were made two days after Iran removed some U.N. seals in the presence of IAEA inspectors from its main uranium enrichment facility in Natanz, central Iran, and resumed research on nuclear fuel.

Iran said it was resuming "merely research" and that "production of nuclear fuel" — which would involve enrichment — "remains suspended." But the IAEA said Tehran also planned small-scale enrichment of uranium, a process that can produce fuel for nuclear reactors to generate electricity or material for nuclear weapons.

"I recommend to European countries that they should separate the issue of research from production of nuclear fuel and not make propaganda over research which is natural and normal but had unjustly been subject to suspension in the past," Mottaki was quoted as saying.

Mottaki said Iran was prepared for talks with Europeans over uranium enrichment.

"If they have any discussion in the stage of nuclear fuel production, we are prepared to continue our talks with the three European countries," he said.

Mottaki, however, insisted that Iran won't give up its right under the Nuclear Nonproliferation Treaty to possess the whole nuclear fuel cycle — from extracting uranium ore to enriching it.

"No one can take this right from the Iranian nation. Regaining this right doesn't require permission from any country," the television quoted him as saying.

Also Thursday, in an interview with CNN, Larijani said Iran wants to reach agreement with Europe and Russia but "the question of our research is nonnegotiable."

He also said that an offer to enrich uranium on Russian territory and then ship it back to Iran to fuel nuclear power stations "would be a good basis for negotiations."

"Iran has the absolute right to enrich," Larijani said. "Meanwhile, the other side has proposed that for a while the issue of enrichment could be resolved in a different way. This is worth discussing. I think we can reach an agreement that could suit today's circumstances."

Europe's negotiations with Iran has been aimed at getting Iran to permanently abandon uranium enrichment but Iran says it won't give up its right under the treaty to enrich uranium and produce nuclear fuel.

Meanwhile, a leading British politician said Friday that Iran should be expelled from the soccer World Cup for resuming its controversial nuclear program.

Conservative lawmaker Michael Ancram said exclusion from soccer's biggest tournament "would give a very, very clear signal to Iran that the international community will not accept what they are doing."