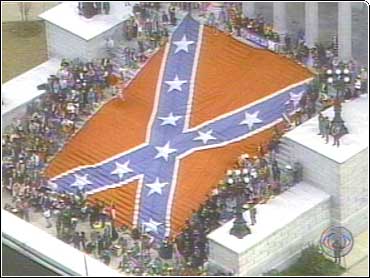 Although they're eager to win South Carolina's Republican presidential primary, George W. Bush and John McCain are trying hard to steer clear of a controversy over the state's practice of flying the Confederate flag.

McCain, campaigning far away Wednesday in Dublin, N.H., read a statement clarifying his position about the flag. He posted the same message on his campaign Web site.

"Personally, I see the battle flag as a symbol of heritage," explained McCain, a Navy veteran who comes from a long line of military leaders. "I have ancestors who have fought for the Confederacy, none of whom owned slaves. I believe they fought honorably."

Bush, meanwhile, reiterated that any decision is up to South Carolina voters.

The flag has flown above the Statehouse since 1962. Five years ago, legislators rebuffed then-Republican Gov. David Beasley's attempts to remove it.

"I've answered that question all I'm going to answer it today," Bush said testily after he again was asked about the flag during a news conference in Wilmington, Del.

He also was on the defensive Wednesday over his campaign's decision to stage a rally the night before at a Charleston plantation that had been worked by slaves.

In another matter involving race, Bush criticized the words of a Republican South Carolina state senator who described the NAACP as the "National Association for Retarded People" for its work against the flag but did not call for an apology.

Reporters asked Bush, the Texas governor, about the race matters after he said he wanted the Republican Party to reach out more to minorities.

In Texas, Bush has recorded growing support from minorities and women. In his 1998 re-election, exit polls showed he got support from 49 percent of Hispanics, 27 percent of blacks and 65 percent of women, nearly all double-digit improvements from his first election in 1994.

On another front Wednesday, Bush picked up the endorsements of Sens. John Ashcroft of Missouri and Connie Mack of Florida, the 32nd and 33rd GOP senators who have announced their support for him.

Referring to his campaign's selection of the Boone Hall Plantation for an oyster roast and campaign rally Tuesday, Bush noted that the site had been used by officials from both parties for political events.