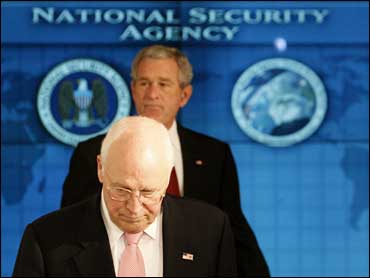 If this does not happen, Bush said, "Our national security professionals will lose critical tools they need to protect our country."

Civil liberties groups and many Democrats say the changes voted in last month already go too far. Congress' Democratic leaders set it to expire in six months so that it could be fine-tuned, and that process is beginning in Congress now.

Democrats hope to change the law to provide additional oversight when the government eavesdrops on U.S. residents communicating with overseas parties.

Bush, visiting the super-secret National Security Agency's headquarters in Fort Meade, Maryland, a Washington suburb, said, "Without these tools, it will be harder to figure out what our enemies are doing to train, recruit and infiltrate operatives into America. Without these tools, our country will be much more vulnerable to attack."

The 30-year-old Foreign Intelligence Surveillance Act governs when warrants for eavesdropping must be obtained from a secret intelligence court. This year's update, approved by the Senate and House just before Congress adjourned for an August break, provides agents more leeway when dealing with foreign communications.

Under the new Protect America Act, the government can eavesdrop, without a court order, on communications conducted by a person reasonably believed to be outside the United States. The law allows such intercepts even if an American is on one end of the conversation so long as the American is not the intended focus or target of the surveillance.

That change was urgently requested by the Bush administration, which said that the modernization of communications technology had created a dire gap in the U.S. terrorism intelligence collection capabilities.

Such surveillance was generally prohibited under the original FISA law if the wiretap was conducted inside the United States, unless a court approved it. Because of changes in telecommunications technology, many more foreign communications now flow through the United States. The new law allows those to be tapped without a court order.

Bush timed his visit to the NSA facility to press his case.

"The threat from al Qaeda is not going to expire in 135 days," he said, "so I call on Congress to make the Protect America Act permanent."

He also pleaded with lawmakers to expand the law, not restrict it. One provision particularly important to the administration, but opposed by many Democrats, would grant retroactive immunity to telecommunications companies which may have helped the government conduct surveillance prior to January 2007 without a court order.

Bush was joined at the podium in an NSA hallway by Vice President Dick Cheney, National Intelligence Director Mike McConnell and others.

The president received private briefings from intelligence officials and mingled with employees in the National Threat Operations Center. While cameras and reporters were in the room, the large video screens that lined the walls displayed unclassified information on computer crime and signal intelligence.