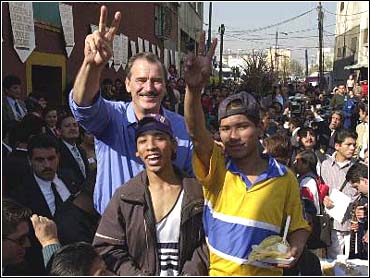 Mexican President Vicente Fox said on Sunday that drug trafficking, immigration, energy and economic development will be the priorities of his first formal meeting with President Bush.

Mr. Bush is slated to meet with Fox on Friday at the latter's ranch in the central highlands state of Guanajuato. The White House has said the trip, Bush's first official foreign visit, signals Washington's renewed focus on Latin America.

CBS News Correspondent Bill Whitaker reports that for Fox, the meeting is one step in his ambition to build the North American Free Trade Agreement into a European-like Common Market, with open borders.

With five days to go before his meeting with the former Texas governor, Fox called on the United States to work with Mexico to reduce the drug trade flowing across the two countries' porous 2,100-mile border.

The 58-year-old former Coca-Cola executive repeated that he would seek to end the annual "certification" process by which the United States approves of a nation's efforts to fight drug trafficking.

Each year the United States weighs the decertification, or blacklisting, of nations that are home to illegal drug activity. Decertified nations can be hit with economic sanctions.

Mexico considers the process demeaning and a breach of its sovereignty.

The Mexican president also said on Sunday he would stress immigration at his meeting with Bush, particularly the contribution made by Mexicans to U.S. economic growth.

"The United States should not ever forget that it is because of immigration that it has arrived where it is, that it is so successful," said Fox. "They have been able to bring all of the talent from around the world."

Immigration has been increasingly in the spotlight in Latin America's second-biggest economy as more and more Mexicans, most fleeing poverty, die from drowning, dehydration and exposure attempting to cross into the United States.

Fox, who has called illegal immigrants "heroes" and said he understands their motivation, is expected to urge President Bush to help Mexico raise its salaries to the point where it wouldn't be worth anyone's while to head north.

Fox concedes that would take decades.

Many in San Cristobal, where Fox's ranch is located, are skeptical even of that.

"That would be tough," said one San Cristobal resident, Leocadio Cruz Ramirez. "We'll keep on going up - illegally."

Ramirez had harsh words for President Bush, saying the best thing the U.S. president could do for San Cristobal would be to hand out some visas.

"He'll come here with just his passport, ight?" he said. "Well, I say the way we treat him is the way he should treat us."

Fox has said he plans to lobby Mr. Bush on behalf of a visa program that would allow Mexican workers to cross legally into the United States to work temporarily - an idea that has received support from the Bush administration and Republican members of Congress.

On energy, Fox is expected to seek greater integration of the nation's energy grids and policies. Mexico already supplies a small amount of electricity to its neighbor and has pledged to help out the power-strapped California with electricity shipments.

Mexico, meanwhile, desperately needs natural gas from the United States to meet its own needs, and officials are hoping for new pipeline projects to bring the clean-burning fuel southward.

Fox, whose inauguration in December ended 71 years of rule by the Institutional Revolutionary Party (PRI), also listed economic development as a key topic for the meeting. He did not provide further details.

Mexican officials have expressed concern over the U.S. economic slowdown since their economy is inextricably linked to the United States through the North American Free Trade Agreement (NAFTA), which also includes Canada.

Thanks to NAFTA, Mexico sells some 90 percent of its exports and the bulk of its crude oil to the United States.

President Bush's visit to Mexico breaks with the tradition of the last three U.S. presidents, including his father, former President George Bush, who made their first presidential trip abroad to Canada.

As governor of Texas, parts of which were carved from Mexico during the Mexican-American War of 1846-1848, Mr. Bush sought to improve ties with the United States' sprawling southern neighbor.