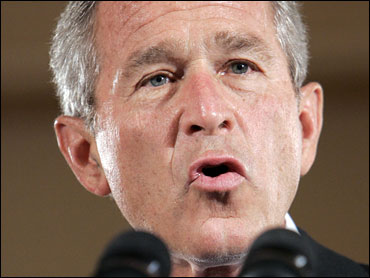 President Bush, linking hurricane recovery and the aftermath of the Sept. 11 attacks four years ago, declared Friday that the United States was ready to "overcome any challenge."

"America is a strong and resilient nation," Mr. Bush said.

Meanwhile, the federal bill for Hurricane Katrina relief soared past $62 billion, and the White House and members of Congress said it was bound to keep climbing. Mr. Bush scheduled his third trip to the devastated region for the weekend.

Congress rapidly and overwhelmingly voted Thursday night to fulfill an urgent plea for $51.8 billion, adding to $10.5 billion that was approved last week for hurricane victims. Mr. Bush signed the bill immediately, saying: "We will continue to help people rebuild their lives and rebuild the region."

Mr. Bush spoke about the hurricane Friday at the swearing-in for Karen Hughes, the State Department's new undersecretary for public diplomacy — a post designed to lift America's image abroad to help win the war on terror.

Mr. Bush offered America's thanks to the more than 100 nations that have offered disaster assistance to the U.S., comparing it to "a similar outpouring of support when another tragedy struck our nation" — the 2001 attacks in New York and Washington.

"Sri Lanka, one of the world' most impoverished nations that is struggling to overcome the effects of the tsunami, has sent a donation of $25,000," he said.

It's a turnaround by Mr. Bush, reports CBS News White House correspondent Mark Knoller. Just last week the president said he wasn't expecting much help from foreign nations because the United States hadn't asked for it.

His speech marked the first of several steps in which the White House is seeking to intertwine the challenge of the anti-terror battle with the effort to recover from the hurricane.

Mr. Bush was to travel to Mississippi and Louisiana over the weekend, spending Sunday and Monday in the region visiting with storm victims and examining response efforts, press secretary Scott McClellan said. That trip was to follow Mr. Bush's attendance at a church service and White House moment of silence marking the fourth anniversary on Sunday of the Sept. 11 terrorist attacks.

While Mr. Bush is linking Hurricane Katrina to 9/11, the public reaction to his handling of the two crises is strikingly different, reports CBS News Senior Political Editor Dotty Lynch

A CBS News poll conducted in 2001 after the Sept. 11 attacks found that 83 percent believed the president had "strong qualities of leadership;" that number was down to 48 percent in a CBS poll taken this week. Similarly, the number of Americans saying they have a lot of confidence in Mr. Bush's ability to handle a crisis has been cut in half – from 66 percent in Sept. 2001 to 32 percent this week.

President Bush's strong card, handling terrorism, has also taken a hit. In just the last week, those who have either little or no confidence in the government's ability to protect Americans from terrorist attacks rose to 40 percent, up from 26 percent a week ago.

The president's Saturday radio address was to focus on both events and the government's response to them.

On Friday, he struck an empathetic tone.

"At this moment our fellow citizens along the Gulf Coast are struggling to recover from one of the worst natural disasters in our country's history," Mr. Bush said. "Thousands have lost their homes, they've lost their loved ones, they've lost all their earthly possessions."

But, he said, "Our people have the spirit, the resources and the determination to overcome any challenge."

"We have much more work to do, but the people who have been hurt by this storm need to know that the government is going to be with you for the long haul," he said Thursday.

The president designated next Friday as a national day of prayer and remembrance for Katrina's victims.

Promises for sustained federal help came amid heightening strain and signs that the road to recovery would be long.

Police prepared to evacuate residents reluctant to leave their homes. Much of New Orleans remained flooded and those who stayed behind lacked power, water and food.

Vice President Dick Cheney toured the region Thursday and described "significant" progress. It was too soon to estimate the total cost of reconstruction, he said.

Mr. Bush used national emergency authority to waive sections of a federal law that requires payment of prevailing wages on government contracts, wages based on surveys that take into account union and nonunion pay. The waiver applies to disaster areas in Louisiana, Mississippi, Alabama and Florida.

Democrats also questioned the wisdom of funneling $50 billion in recovery funds through the Federal Emergency Management Agency with questions swirling about whether it acted too slowly to help hurricane victims.

"After what we all have witnessed the past week or so, is there anyone in America who feels we should continue to rely exclusively on FEMA to head the federal government's response to this tragedy?" asked Senate Minority Leader Harry Reid, D-Nev.