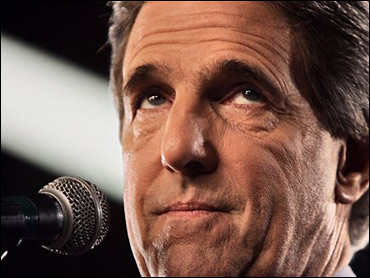 Sen. John Kerry accused President Bush on Tuesday of hiding bad decisions and raised the specter of bad news still to be revealed. Mr. Bush invited Democrats to cross over to his campaign, arguing that their party was no longer led by men of strength and resolve.

Both candidates campaigned in the key battleground of Wisconsin as the presidential campaign entered its final week with polls showing the race too close to call.

Kerry, in Green Bay, said a stream of bad news coming out of Iraq showed the Bush administration glossing over the reality of the situation there.

While Kerry campaigned on the east side of Wisconsin, a state Mr. Bush barely lost to Al Gore in 2000, the president sought votes from Democrats as well as Republicans on the state's west side.

In Onalaska, Mr. Bush said Kerry had chosen a path of "weakness and inaction," putting himself "in opposition not just to me, but to the great tradition of the Democratic Party."

"The party of Franklin Roosevelt and Harry Truman and John Kennedy is rightly remembered for confidence and resolve in times of war and in hours of crisis. Senator Kerry has turned his back on 'pay any price' and 'bear any burden,"' Mr. Bush said.

The president also renewed his contention that Kerry would raise taxes in a way that would cripple small businesses "to pay for all the new spending he's proposed."

The Massachusetts senator pressed his case that Mr. Bush has bungled and misled on the Iraq war and national security crises generally.

"When the president is faced with the consequences of his own wrong decisions, he doesn't confront them, he tries to hide them," Kerry said. "The truth is, President Bush has never leveled with the American people about why we went to war, how the war is going, or what he is doing in order to put Iraq on track."

And Kerry broadened the attack to declare, "Just as he has been warned about his mistakes in Iraq, George Bush has been warned time and time again about the vulnerability of our homeland security."

Kerry said he would spend an additional $60 billion over 10 years on homeland security, using the money to screen cargo for nuclear materials at ports and borders, add border patrol agents and more.

Tuesday was a four-state day for Kerry, traveling more than 3,000 miles from Green Bay to Las Vegas, to Albuquerque, N.M., and then Sioux City, Iowa.

Mr. Bush, who lost Wisconsin and its 10 electoral votes by only 5,708 ballots in 2000, was focusing his efforts in Democratic-leaning reaches of the state.

Warming up for that task in his last stop Monday, in Davenport, Iowa, he ditched his single-focus, national security speech of earlier events in favor of a broader pitch praising the traditions of the Democratic Party, a theme he returned to on Tuesday.

Also, in a television interview aired Tuesday, Mr. Bush said he didn't oppose civil unions for same-sex couples even though the Republican Party platform opposes them. However, he supports banning gay marriage through a constitutional amendment.

"I don't think we should deny people rights to a civil union, a legal arrangement, if that's what a state chooses to do so," Mr. Bush said on ABC. "I view the definition of marriage different from legal arrangements that enable people to have rights."

National polls showed the race a statistical tie seven days before the election. A Reuters/Zogby poll gave Mr. Bush a 49-46 percent edge over Kerry, while a Washington Post/ABC survey had Kerry with a 1-point lead, 49-48 percent. A Los Angeles Times poll scored the race a dead heat at 48-48.

In a dispute between the running mates, Democrat John Edwards criticized Vice President Dick Cheney for claiming on Monday that Iraq was "a remarkable success." In Minneapolis on Tuesday, Edwards said, "Eleven hundred American soldiers have lost their lives, more than 8,000 have been wounded. Terrorists are flowing in. Americans are being kidnapped. We see beheadings on television. The costs are now $225 billion and counting. And, knowing all of this, yesterday all Dick Cheney could say was that Iraq is a remarkable success."

Republicans spoke dismissively of Kerry's appearance with former President Bill Clinton at a huge rally in Philadelphia on Monday, suggesting it showed Kerry lacked luster with his Democratic base.

"They had to roll Clinton out of the operating room and onto the campaign trail in order to basically help Kerry with the weaknesses he has among core Democratic constituencies," Rove said, taking liberties with his depiction of the former president as a near invalid.

The candidates are competing head-on for a distinct set of battleground states — Pennsylvania, Ohio and Florida among them — but other states are getting a second look, too, because of signs of fluidity.

Polls found a tightening race in Arkansas, which Mr. Bush won in 2000 and the Democrats had not seen as a serious prospect this time. New Hampshire, narrowly won by Mr. Bush in 2000, seemed to be moving Kerry's way in the final stretch.

Hawaii, on the other hand, which had been considered a solid state for Kerry, is now all even, according to polls in the Honolulu Star-Bulletin and elsewhere.

Meanwhile, six in 10 voters surveyed in an Associated Press poll say it's likely there will not be a clear winner in the presidential race by Nov. 3 – the day after the election. About half say they fear the results will be challenged in court.

Concerns about the possibility of an unresolved election extend across party lines, though more Democrats (69 percent) express worries than Republicans (56 percent).