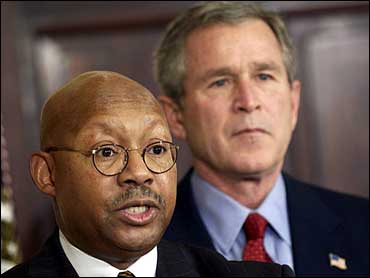 To head the federal housing agency, President Bush turned to Alphonso Jackson, a man who is both a longtime expert in the field and a faithful friend.

Bush said Friday that Jackson, the No. 2 for the past three years at the Department of Housing and Urban Development, "knows the issues facing HUD and knows how to get things done." The president announced his choice before family and aides in the White House's Roosevelt Room.

If confirmed by the Senate, Jackson will succeed Mel Martinez, who has resigned to run for a U.S. Senate seat from Florida.

Jackson and Bush are old friends from Texas. Jackson often accompanies Bush for rounds of golf in Washington.

"I used to drop by for an occasional cup of coffee, sometimes unannounced," Bush said of their days living in the same neighborhood in Dallas.

The president referred with pride to Jackson's roots as the youngest of 12 children - "a housing challenge unto itself," Bush noted with a laugh.

Jackson said the sacrifices his parents made for him made him all the happier to accept the new assignment.

"Along with education, my mother and my father instilled in me early the importance of giving back," he said, Bush at his side. "Today I have been blessed with an opportunity to give back in a way I could never have imagined.

Jackson will take over as chief of a $32 billion agency charged with helping to provide affordable housing and promoting community and economic development. He promised that the department, under his leadership, would "guide more families toward home ownership, financial security and the stability that it provides."

"We will bring new hope to urban communities through revitalization initiatives in conjunction with cities and states," he added.

Said the president: "Alphonso is just the man to carry on the work of compassionate conservatism in America's cities."

It wasn't the first time Bush has given Jackson a plum post. Jackson was appointed by then-Gov. Bush to serve on Texas Southern University's board of regents.

Before being confirmed unanimously by the Senate to be HUD's deputy secretary in June 2001, Jackson was Texas president of American Electric Power, an energy and utility company based in Columbus, Ohio.

Previously, the Dallas native served as chief executive officer of the Dallas Housing Authority from 1988 to 1996. He has also headed the housing agencies for Washington, D.C., and St. Louis.

Jackson holds undergraduate and graduate degrees from Truman State University in Kirksville, Mo., and a law degree from Washington University.