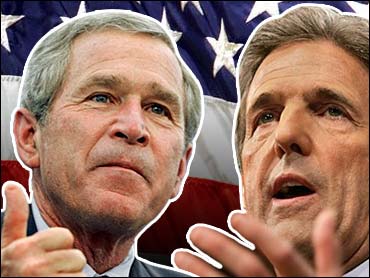 
The good news for President Bush in the latest CBS News/New York Times poll is the razor-thin lead he gets in the horserace.

The bad news in the poll is that his approval rating is in the low 40s, more Americans feel the country is on the wrong track and more voters dislike him than like him.

John Kerry also has higher "unfavorable" than "favorable" ratings. The question is whether Kerry's marks matter in a campaign that is largely about Mr. Bush's performance.

In the CBS/NYT survey, Mr. Bush leads Kerry 47-45 among likely voters, with Ralph Nader taking 2 percent. The lead is within the poll's margin of error.

That's in line with a Washington Post daily tracking poll that has Mr. Bush up 50-46 percent and a Reuters/Zogby survey that shows the men tied at 45 percent each.

Among likely voters, a CNN/USA Today/Gallup poll sees a wider gap, with Mr. Bush up 52-44 percent, a shift from Kerry's one-point lead in that survey last week. Among registered voters, Mr. Bush's lead is a mere 49-46 percent.

The polls are largely variations on a theme that's emerged over the past month. In 33 polls so far during October, the average margin between Mr. Bush and Kerry is about 1.3 percent.

With the horserace too close to-call, pundits are hunting for other numbers that may indicate trends in the electorate.

The Los Angeles Times reported Monday that some observers look at the president's approval rating as a key factor, with any rating below 50 percent spelling trouble for the incumbent.

In the CBS/NYT poll, 44 percent said they approved of the president's performance, compared to 48 percent who do not approve. Other surveys have approval ratings ranging as high as 51 percent.

Another factor is the candidate's favorability ratings.

According to the Pew Research Center for the People and the Press, since 1960 only two candidates won despite having lower favorability ratings than their opponents: Ronald Reagan, who was viewed favorably by 58 percent to President Carter's 62 percent in 1980; and John Kennedy, who defeated Richard Nixon despite Nixon holding a 74-68 favorability advantage in Gallup polls.

In the new CBS/NYT survey, 39 percent of voters say they view Kerry favorably, to 43 percent for the president. Mr. Bush is viewed unfavorably by 45 percent to Kerry's 44 percent.

Those numbers are lower than in other polls — Gallup has Mr. Bush with a 55 percent favorable rating and Kerry with 52 percent — perhaps because a sizeable portion of CBS/NYT respondents say they are undecided on the question, or don't know. Sixteen percent said they were undecided on whether they liked Kerry, and 12 percent on Mr. Bush.

What's clear, however, is that "a large proportion of the electorate have reservations about both of these guys for several different reasons," said Emory University professor Alan Abramowitz.

Those reservations seem to revolve around whether Kerry can be trusted and whether Mr. Bush is out of touch.

In the CBS/NYT poll, 60 percent said Kerry "says what people want to hear" versus 37 percent who think he "says what he believes." The numbers are roughly reversed for Mr. Bush.

But asked if the candidates understand their needs and problems, 45 percent said Mr. Bush did, to 51 percent for Kerry.

The concern for the president's supporters is that doubts about Mr. Bush could carry more weight than worries about Kerry.

"When you have a well-known incumbent running for reelection … if voters have not by the time you get to the final days going into the election been able to commit themselves to the incumbent, they usually end up voting for the challenger," Abramowitz said.

"People's views of the incumbent tend to count for more," he said.

It's not clear that will be true this time, however, as the Bush campaign has been focused on painting Kerry as a weak leader with a record of changing positions on key issues.

"I think the Bush campaign has fairly effectively made this a referendum on Kerry," said American Enterprise Institute scholar Karlyn Bowman.

However, the Bush campaign's attacks on Kerry have to trump voters' worries about the direction of the country. According to the CBS/NYT survey, 57 percent now feel the country is on the wrong track, to 39 percent who feel it is on the right track.

In past elections for which right track/wrong track responses could be found, the question proves an unreliable predictor of how the vote will go.

But in 1996, a month before President Clinton won reelection, respondents favored "wrong track." In May 2000, a few months before Mr. Clinton's successor was defeated, "right track" was the pick. Bowman feels the "right track/wrong track" question is more a social indicator than a political one, and edges up when news from Iraq is bad. Indeed, the numbers suggest that at least some Bush supporters think the country is on the wrong track.

Whatever trends are reflected by the numbers on job approval, favorability and right track/wrong track, few pollsters are making any predictions of what those trends augur.

The horserace numbers are eyed most suspiciously; Abromowitz notes that in the last week of the 2000 campaign, there were 43 polls. Mr. Bush was leading in 39. The next week, Al Gore won the popular vote.