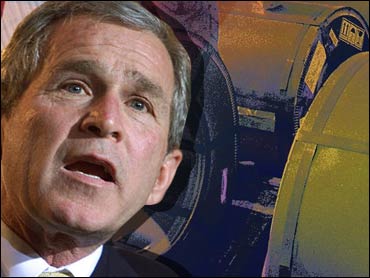 President Bush on Thursday scrapped import tariffs he had imposed last year to help the battered U.S. steel industry, defusing a threatened trade war with Europe and Japan but creating political problems for himself in states that could be key in next year's election.

Mr. Bush declared that the 21 months the steep tariffs had been in place had given the U.S. industry a chance to consolidate and modernize and were no longer needed as a result of "changed economic circumstances."

"It appears he capitulated to threats of economic blackmail and intervention in our us elections," said Leo Gerard, president of the United Steelworkers of America.

Sen. Robert Byrd, D-W.Va., said the administration had "shattered any credibility it ever had with the steel industry in West Virginia and across the country."

Imposing the tariffs had won the president support in steel states such as West Virginia, Ohio and Pennsylvania, all considered important to his re-election chances next year. But that action last year had come under heavy attack from states dominated by steel-consuming industries that were forced to pay higher prices because of the protective tariffs.

Adding to the political pressure, the 15-nation European Union had drawn up a $2.2 billion retaliation list targeting a wide range of products from other key election states Mr. Bush is hoping to win next year such as Florida, California, Louisiana and the Carolinas.

Within minutes of the president's announcement that the tariffs were to expire at midnight Thursday, the EU said it was withdrawing its $2.2 billion list of targeted products.

Japan, South Korea and other countries that had joined in a successful challenge of the tariffs before the World Trade Organization had said they would also drop their retaliation threats if the tariffs were eliminated.

"These sanctions ... were there as a tool for compliance," said EU Trade Commissioner Pascal Lamy. "They've complied and the sanctions will disappear."

Mr. Bush's action was criticized by Democrats campaigning for his job.

Former Vermont Gov. Howard Dean said that despite Mr. Bush's claims "the steel industry needs additional breathing room to get back on its feet." Rep. Dick Gephardt, D-Mo., said the president's action demonstrated a "callous disregard for the workers and the communities whose jobs and livelihoods have been decimated by unfair competition." Former Gen. Wesley Clark said Bush needed to "listen to the 2.6 million manufacturing workers who've lost their jobs" while he has been in office.

However, Republican free-trade supporters and industries hurt by the steel tariffs praised Mr. Bush's decision, saying it had averted a debilitating tit-for-tat fight with some of America's biggest trading partners.

William E. Gaskin, head of the Consuming Industries Trade Action Coalition Steel Task Force, called the ending of the tariffs the "right decision for the 13 million workers in steel consuming industries ... and the overall U.S. economy."

Mr. Bush said restructuring has occurred to allow the steel industry to become more competitive, more flexible union contracts have been worked out, and the outlook has improved for the U.S. and global economies, boosting worldwide demand and helping to lift prices and steel company profits.

"I strongly believe that America's workers can compete with anyone in the world as long as we have a fair and level playing field," Mr. Bush said in a statement.

To soften the blow of his decision, the president announced that an early warning monitoring system that had been put in place as part of the original tariffs would continue in operation.

Under this program, steel importers are required to apply for special import licenses, supplying the government and the domestic steel industry with early information on the amount of foreign steel that will be coming into the country.

Mr. Bush said this information would mean "my administration can quickly respond to future import surges that could unfairly damage the industry."

However, his announcement did not contain pledges that the steel industry had hoped to see in terms of strengthening U.S. laws protecting domestic industries against the sale of foreign products in this country at unfairly low prices, a practice known as dumping.

The administration did pledge to push ahead with negotiations that have been under way for the past two years in Paris aimed at forging an agreement with other countries to limit the amount of government subsidies provided to the steel industry.

Commerce Undersecretary Grant Aldonas told reporters he believed an agreement could be reached on limiting government subsidies by May of next year. However, outside experts called that an extremely optimistic forecast, given the strong resistance in many countries to doing anything to trim subsidies for their steel industries.