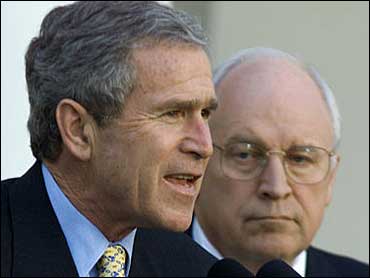 
President Bush and Vice President Dick Cheney's Thursday meeting with the Sept. 11 commission is the latest chapter in an historical wrestle between the executive and legislative branches.

Although the agreement to appear is a compromise, the meeting took place largely on White House terms. In allowing Mr. Bush and Cheney to appear, the White House stipulated that no transcripts would be taken and that neither would speak under oath, hence differentiating it from formal testimony.

The White House claimed Tuesday that a previous appearance before the commission by former President Bill Clinton and his vice president, Al Gore, was also not recorded. But CBS News has learned that both men's sessions were recorded and a transcript will be excerpted or possibly released in full. A source in the Sept. 11 commission said Mr. Clinton and Gore also did not give sworn testimony.

"It would be much better to have transcripts," said Fred Greenstein, a presidential historian at Princeton University. "But to begin with Bush didn't want a commission. They are very big on executive privilege. This is an administration that is not high on transparency and very strong on executive prerogative of one kind or another."

The session began at 9:30 a.m. EDT at the White House. Although it was not to be recorded, the panel and the White House each were to have an aide present to take handwritten notes.

The oblique nature of the meeting being unrecorded by either a stenographer or by tape, allows the White House some plausible leeway in denying certain statements.

"I don't think you can undermine the significance, historical or otherwise, of the testimony," said presidential historian Richard Norton Smith, executive director of the Abraham Lincoln Presidential Library and Museum.

Calling it "a first," Smith added, "I think what happens in that room tomorrow will initiate a much more public conversation... there will be various versions of what went on."

Although Smith and other presidential historians are quick to point out that there have been additional occasions where presidents have spoken to investigatory commissions for the record, a combination of factors makes Thursday's appearance especially significant.

One factor is that Mr. Bush and Cheney reluctantly agreed to meet with the full ten-member commission without a time limit, after at first saying they'd only meet for an hour with the chairman and vice chairman. It is nearly unprecedented that a sitting president submits to the grilling Mr. Bush was likely to encounter — and by a congressionally appointed body, no less.

An added factor is that the appearance is tied to the terrorist attacks of Sept. 11, an event of great historical context. Questions will surround what the president and vice president knew about al Qaeda prior to Sept. 11, 2001, and what action they took – or didn't take.

Thomas Jefferson and James Monroe testified in various trials, both on their own terms. Ulysses S. Grant was deposed in the White House for a trial regarding a group of whiskey distillers who funded the Republican Party while defrauding the federal government of liquor taxes.

But Gerald Ford's public testimony, nearly a century later, before a House Judiciary subcommittee to explain his reasoning for pardoning ex-President Richard M. Nixon was both unprecedented and has not been repeated.

Since Ford, President Ronald Reagan has testified behind closed doors and denied that he was aware of the Iran-Contra affair. And, of course, few forget Mr. Clinton's grand jury testimony when he acknowledged his "improper intimate contact" with Monica Lewinsky.

"It's easy to generalize and say this White House it is too secretive but there are some legitimate constitutional issues," Smith said.

"I think there is a special atmosphere in this White House that goes back to Cheney's experience when he was chief of staff to Gerald Ford," Smith continued.

"I'm not justifying it but if you stop to think, in the 1970s, Cheney became Ford's chief of staff at a time when the presidency was really under assault – understandably after LBJ and Nixon. The War Powers Act Passed in 1973 and there was this notion that executive powers were crumbling."

On Tuesday, the Supreme Court heard arguments on a related issue of executive privilege surrounding Cheney's meetings with energy industry leaders in drafting a national energy strategy. The White House refuses to disclose who met with Cheney.

Also raising some eyebrows is the fact that Mr. Bush and Cheney only agreed to meet with the panel Thursday if they could appear together.

Greenstein understands the president's reluctance to appear by himself. "If I were Bush I would not want to testify separately from Cheney on the grounds that it is just an invitation to look for small shades of discrepancy of one kind or another since Cheney is such a detailed man and Bush is such a big picture person," he said.

Mr. Bush initially opposed the creation of the Sept. 11 commission. He also opposed letting National Security Adviser Condoleezza Rice testify publicly, a point he acquiesced on later. Thursday will likely not mark closure on the issue, as the White House hopes. On the contrary, the media will immediately begin attempting to piece together what occurred.

"There will be questions after," Greenstein said. "Was Bush forthright? Everybody will be obsessed with whether Cheney was passing him cue cards. Did Cheney provide prompts? Did Bush pull a blank?

"You would love to be a fly on the wall there," Greenstein continued, "because it will make a great chapter in the Bush presidency."