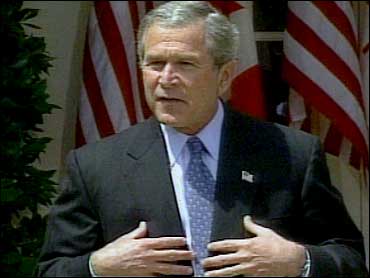 President George W. Bush on Friday condemned the mistreatment of some Iraqi prisoners in U.S custody, saying, "Their treatment does not reflect the nature of the American people. That's not the way we do things in America. I didn't like it one bit."

A series of photographs, showing U.S. soldiers smiling while naked Iraqi prisoners were stacked in a pyramid or positioned committing simulated sex acts, are being broadcast around the world. The images, which document alleged abuses that have led to charges against six American soldiers, were first .

The six U.S. soldiers facing courts-martial in connection with the mistreatment of the detainees at an Iraqi prison did not receive in-depth training on the Geneva Conventions, which govern the handling of prisoners, a U.S. military spokeswoman said Friday.

Those soldiers have been reassigned to other duties in Iraq, Col. Jill Morgenthaler said in an e-mail from Iraq. No court-martial proceedings against them have taken place, she said.

Their boss, Brig. Gen. Janis Karpinski, commander of the 800th Military Police Brigade, and at least seven others have been "suspended" from their duties at Abu Ghraib prison, Morgenthaler said.

It was unclear what a suspension entails, or if it is the same as being formally relieved. Morgenthaler said she believed Karpinski had returned to the United States.

Arab television stations were leading their newscasts on Friday with the photos, showing scenes of humiliation including a naked prisoner with a slur written in English on his skin.

The 1949 Geneva Conventions prohibit "outrages upon the personal dignity, in particular humiliating and degrading treatment" against any detainee. Mistreatment that amounts to "torture or inhuman treatment" is a grave breach of the Geneva Conventions, which is a war crime.

Karpinski has been replaced as head of the prison by Maj. Gen. Geoffrey Miller, deputy commander for detainment operations. Miller formerly commanded the U.S. prison for alleged terrorists at the Navy base at Guantanamo Bay, Cuba.

In the past, Karpinski has defended the prison against claims from freed prisoners and human-rights groups that prisoners were abused, saying Iraqis were treated "humanely and fairly."

Last September, during a visit by Defense Secretary Donald Rumsfeld, she displayed torture devices used there by Saddam's interrogators. The prison was one of the most notorious in Iraq under Saddam's regime.

The acknowledgment that the soldiers did not receive in-depth training on international covenants regarding the handling of prisoners echoes complaints from Army Reserve Staff Sgt. Ivan "Chip" Frederick, one of the six facing court-martial, and his civilian lawyer in Washington, Gary Myers.

Charges include dereliction of duty, cruelty and maltreatment, assault and indecent acts with another person.

Some military officials privately said U.S. soldiers should have known better whether they had specific training or not.

Defense counsel for one of the accused soldiers claims that the soldiers had been ordered to "soften up" the detainees for interrogation. Moreover, private contractors allegedly were among those overseeing the interrogation process.

In some photos from the prison, two U.S. soldiers standing near the prisoners hammed it up for the camera. One of the photos showed a hooded prisoner standing on a box with wires attached to his hands. CBS reported the prisoner was told that if he fell off the box, he would be electrocuted, although in reality the wires were not connected to a power supply.

Human Rights Watch said Friday that the United States should also investigate the superiors of the six soldiers, to see whether they ordered or knowingly tolerated these abuses.

"The brazenness with which these soldiers conducted themselves, snapping photographs and flashing the 'thumbs-up' sign as they abused prisoners, suggests they felt they had nothing to hide from their superiors," said Kenneth Roth, executive director of Human Rights Watch. "Their superiors should be closely scrutinized to see whether they created an atmosphere of impunity that fostered this abuse."

The U.S. has stressed that the pictures violate military policy.

"Frankly, I think all of us are disappointed by the actions of the few," Brig. Gen. Mark Kimmitt, deputy director of coalition operations in Iraq, told 60 Minutes II.

"This is wrong. This is reprehensible. But this is not representative of the 150,000 soldiers that are over here," adds Kimmitt.

In Iraq, a U.S. army lieutenant colonel who admitted that in August he threatened to kill an Iraqi detainee, firing a shot next to the man's head during a violent interrogation, received a fine as a disciplinary measure, but was not subjected to a court martial. The U.S. army in January discharged three reservists for abusing detainees at a detention camp near Basra in southern Iraq.

"It's clear that the United States has not taken the issue of prisoner abuse seriously enough," said Roth. "These sordid photos from Iraq show that systematic changes in the treatment of prisoners are needed immediately."

On Friday, British military officials confirmed that they are investigating new allegations that their soldiers abused a prisoner in Iraq.

The report followed confirmation from the Ministry of Defense in a separate case that military authorities are considering whether to prosecute eight soldiers for allegedly abusing prisoners.

The new charges came as the Daily Mirror newspaper published photos of a hooded prisoner who reportedly was beaten and had teeth broken at the hands of British troops.

"All allegations are already under investigation," Gen. Michael Jackson, chief of the General Staff, told a late night news conference.

"If proven, the perpetrators are not fit to wear the queen's uniform. They have besmirched the good name of the army and its honor."

The Mirror said it was given the pictures by serving soldiers from the Queen's Lancashire Regiment, who were concerned that "rogue elements" in the army were undermining attempts to win support from the Iraqi people.

The newspaper quoted the unidentified soldiers as saying the unarmed captive had been threatened with execution during eight hours of abuse, and was left bleeding and vomiting. They said the captive was then driven away and dumped from the back of a moving vehicle, and it was not known whether he survived.