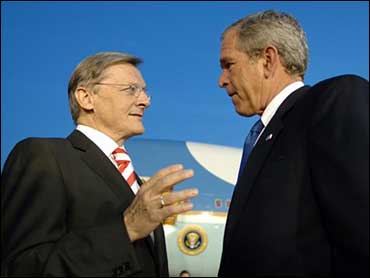 The issue is shadowing this year's U.S.-European Union summit, which began with a morning meeting between Mr. Bush and Heinz Fischer, the president of Austria, which holds the 25-nation EU's rotating presidency.

The looming standoff with North Korea wasn't apparent when the meeting began at the ornate Hofburg Palace. Mr. Bush joked that he and Fischer were like "thorns between two roses" as they posed for photographs between Secretary of State Condoleezza Rice and Austrian Foreign Minister Ursula Plassnik.

Pyongyang on Wednesday called for direct talks with the U.S., but the White House rejected that, repeating that the avenue for the talks remains with the stalemated six countries.

The White House has not ruled out the possibility it would shoot down the missile, reports CBS News correspondent Thalia Assuras.

The formal agenda for the annual U.S.-EU summit centers on reducing the West's addiction to imported oil and gas, fighting terror, protecting intellectual property rights and discussing an EU plan to channel critically needed cash to the Palestinians.

Mr. Bush, who also met with Austrian Chancellor Wolfgang Schuessel and EU leaders, planned to press his European counterparts to follow his lead and promise to eliminate government support for farmers, a sticking point in difficult talks for a global free-trade pact.

"If they can move in that direction, we're going to be in the zone of getting an agreement by the end of the year," Mr. Bush's national security adviser, Stephen Hadley, told reporters traveling with the president to Austria on Air Force One.

Mr. Bush also is urging European nations to make good on their pledges of financial assistance for Iraq's reconstruction. Hadley would not name the countries that have not yet delivered, but he said the president believes that coming up with the money now is crucial to the success of the fledgling leadership in Baghdad. The administration says only $3 billion of $13 billion promised has gone to Baghdad.

Iran's suspected nuclear ambitions also were sure to come up.

Earlier this month, the United States, Britain, France, Germany, China and Russia offered Iran incentives to impose a long-term moratorium on uranium enrichment, a process that can produce material for nuclear generators or bombs. With the Bush administration insisting Tehran has "weeks, not months" to make a decision, Iran has so far neither rejected nor accepted the proposal.

That leaves the showdown in a holding pattern with little to discuss as Mr. Bush meets with EU leaders who aren't the major players in the issue.

Mostly, Iran is a source of some goodwill for Mr. Bush on a continent where anti-Americanism is widespread and dislike of his foreign policy is strong, primarily stemming from his 2003 decision to invade Iraq.

The abuse of Iraqi prisoners by U.S. soldiers at Abu Ghraib, allegations of a massacre of unarmed civilians by U.S. Marines at Haditha and reports of secret prisons for terror suspects have only added to European concerns about Washington. Mr. Bush will be greeted by mounting calls for closing the U.S. detention center for terror suspects at Guantanamo Bay, Cuba, where three prisoners committed suicide this month.

But Mr. Bush's second-term shift in strategy on Iran — agreeing to join direct talks if Tehran suspends uranium enrichment and teaming up to craft the incentives package — has won him accolades for working closely with other nations.

Still, anti-Bush sentiment was apparent. About 300 students chanting "Bush Go Home!" rallied at a train station to protest Mr. Bush's visit to the capital where some 1,000 police officers were assigned solely to deal with demonstrators, and 2,000 others patrolled the city.

Leading the students was U.S. "peace mom" Cindy Sheehan — who lost her son in Iraq and energized the anti-war movement last summer with a protest outside Mr. Bush's Texas ranch. The demonstrators waved black flags, blew whistles, beat drums and shouted, "Hey, ho, Bush has got to go!" Others carried banners that read "World's No. 1 Terrorist" and signs said "Islam is not the enemy" and "Against war and capitalism."