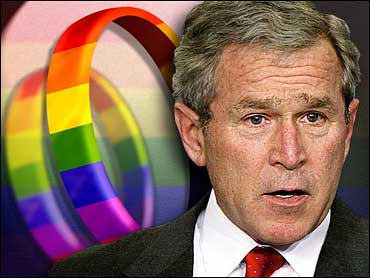 Citing an "overwhelming consensus in our country" against same-sex marriage, President Bush on Tuesday called for a constitutional amendment banning gay wedlock.

The president's action comes as Massachusetts nears a court-imposed deadline to recognize gay marriage, and as San Francisco and a New Mexico county issue marriage licenses to same-sex couples.

"Unless action is taken we can expect more arbitrary court decisions, more litigation, more defiance of the law by local officials, all of which adds to uncertainty," the president said.

"On a matter of such import, the voice of the people must be heard," Mr. Bush said. "Activist courts have left the people with one recourse. … Our nation must enact a constitutional amendment to defend marriage."

Calling heterosexual marriage "the most enduring human institution," he said the issue rose to the importance for which amendments to the constitution are normally reserved.

"After more than two centuries of American jurisprudence and millennia of human experience, a few judges and local authorities are presuming to change the most fundamental institution of civilization," the president said. "Their action has created confusion on an issue that requires clarity."

The president said the federal amendment should ban gay marriage, but allow states to make other arrangements for gays — potentially opening the door for civil unions.

"For the families that we serve this is a nuclear bomb," David Buckel of the Lamba Legal Department told CBS Radio. "This can potentially wipe off the map their efforts to try to get equality for their family."

Rev. Louis Sheldon of the Traditional Values Coalition says a constitutional amendment saying marriage is between a man and a woman would not discriminate against gays and lesbians

"Homosexuals are free to do whatever they want," he said, "but they are not free to steal an institution since the dawn of history and call it marriage."

White House press secretary Scott McClellan said Mr. Bush believes that legislation for such an amendment, submitted by Rep. Marilyn Musgrave, "meets his principles" in protecting the "sanctity of marriage" between men and women.

But Mr. Bush did not specifically embrace any particular piece of legislation. White House officials say that support for Musgrave's proposed amendment has been unraveling in the Senate.

The Musgrave amendment reads: "Marriage in the United States shall consist only of the union of a man and a woman. Neither this Constitution or the constitution of any State, nor state or federal law, shall be construed to require that marital status or the legal incidents thereof be conferred upon unmarried couples or groups."

Gay marriage could become a divisive issue in the presidential campaign. Most Americans, 61 percent, say they are opposed to a law allowing gay couples to marry, according to a CBS News/New York Times poll conducted in December.

While both John Edwards and John Kerry say they oppose gay marriage, Kerry hails from the state where courts have approved it. Kerry voted against the 1996 federal Defense of Marriage Act, which exempts states that oppose gay marriage from having to recognize same-sex marriages from out of state.

Mr. Bush on Tuesday referred to the large majorities that supported that law — it passed the House 322-67 and the Senate 85-14 — as evidence of the "overwhelming consensus in our country" against gay marriage.

Publicly, Mr. Bush had shown some reluctance to push for a constitutional amendment, refusing to call for it for several months. But conservatives have been saying for a month that the White House had quietly assured them that Mr. Bush would take the step he was announcing on Tuesday.

Events on both coasts appear to have propelled the issue forward.

"We need to act now," McClellan said. "The constitutional process will take time."

McClellan said 38 states have passed laws protecting the "sanctity of marriage and the president will call on Congress to move quickly to pass legislation that can then be sent to the states for ratification."

In Massachusetts, a state court ruling means gays could start getting married in May. Even if state lawmakers agree on a ban of same-sex marriage, it could not take effect until 2006.

In San Francisco, more than 3,000 same-sex couples have been married since Mayor Gavin Newsom decided to give out the licenses Feb. 12.

There has been no violence associated with the San Francisco marriages.