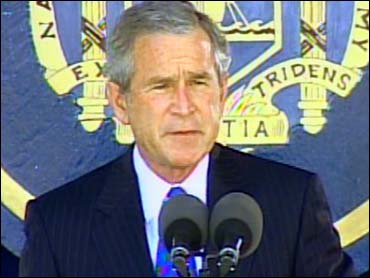 Addressing nearly a thousand midshipmen who began at the Naval Academy just weeks before the attacks of 9/11, President Bush on Friday prepared the graduates for their role in the war on terrorism, reports CBS News White House Correspondent Mark Knoller.

"In this war there is only one option and that is victory," he said in a commencement address to the academy's Class of 2005.

Calling this a time of unprecedented dangers, Mr. Bush urged the new Navy ensigns and Marine Corps second lieutenants to challenge the conventional and be champions of change in the military, transforming it for the threats of the 21st century.

"In this era of surprise, we cannot know for certain who might attack us or where or when," he said. "But we can anticipate how we might be attacked and we can transform our capabilities to defend our citizens and deliver justice to our enemies."

He also spoke for the first time publicly about how closing down domestic military bases is a painful but crucial step in fielding the best possible fighting force for an age of terror.

"We have more bases than we need," Mr. Bush said. "Supporting these facilities wastes billions of taxpayer dollars – money that can be better spent on giving you the tools to fight terrorists and confront 21st-century threats."

Mr. Bush said he knows from his time as governor of Texas how hard base closings can be. But he promised the process will be "impartial and fair."

The graduation ceremonies got under way with 21 cannon blasts and a fast and low flyover by the Blue Angels, the Navy's precision jet team. Six F/A-18 Hornets streaked in formation above the Navy-Marine Corps Stadium packed with thousands of cheering graduates, relatives and faculty.

Before he spoke, ebullient midshipmen got several rousing rounds of "the wave" going around the stadium at this prestigious academy on the shores of the Chesapeake Bay.

Maintaining his tradition of rotating between the service academies for commencement ceremonies, the president also sought to inspire the military's future leaders.

Before the 976 graduates hurled their starched white hats into the blue sky and left the academy for their new status as military officers, Mr. Bush offered thanks for the many he addressed on the same field four years ago — people who now are serving in difficult military operations in Iraq, Afghanistan and elsewhere. He recounted the brave deeds of several by name, and one whose name he said he could not reveal.

"Americans are grateful to have such brave defenders," Mr. Bush said. "They are serving our nation with valor and distinction and soon you'll join them."

"You will make America proud," he added.

The president softened up the crowd with a few jokes — some at his expense.

"You threw pennies at Tecumseh, the god of 2.0. I knew him pretty well when I was in school," Mr. Bush joked, recalling his own academic mediocrity at Yale University.

He also brought what he said was his graduation gift to the class, a traditional offering at this event: absolution for all those on restriction for missing curfew or breaking other rules of conduct. That got a big cheer.

It was Mr. Bush's second and final commencement speech of 2005. Last Saturday, he spoke to the Calvin College graduating class in Grand Rapids, Mich.

After the graduation, Mr. Bush was traveling by helicopter to the Camp David presidential retreat in Maryland for the weekend. He is scheduled to return to Washington for Memorial Day events on Monday.