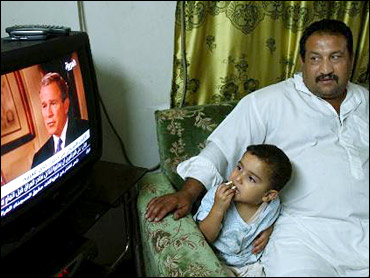 President Bush on Wednesday promised Arab television viewers that "justice will be served" in a full investigation of alleged abuse by U.S. soldiers and contractors of Iraqi detainees.

"The people of Iraq must understand that I view those practices as abhorrent," Mr. Bush told al-Hurra. "They must also understand that what took place in that prison does not represent the America that I know."

"The America that I know has sent troops to Iraq to promote freedom," he said.

Sen. Joseph Biden, D-Del., said Wednesday that if adequate answers to questions about the abuse of prisoners are not provided, then top officials, including Rumsfeld, should resign.

"If it goes all the way to Rumsfeld, then he should resign," Biden said in a televised interview. "Who is in charge? I mean, look, every single, solitary decision made almost since the fall of Saddam Hussein has been mistaken. Who's making these decisions?"

Sen. John McCain said on ABC "it's time the Defense Department turned over all documents relative to this" to Congress. He said the outrage over the abuse can put U.S. military people at greater risk.

Fourteen deaths of detainees in U.S. custody in Iraq and Afghanistan are now either blamed on U.S. troops or under investigation.

The military said Tuesday it was probing 10 suspicious deaths. In addition, one U.S. soldier has been court-martialed for killing an Iraqi prisoner in September, and a CIA contract interrogator is alleged to be responsible for the death of an Iraqi prisoner last November.

An intelligence official said Wednesday that the CIA inspector general is investigating two other deaths involving CIA interrogators. One took place at an Afghan prison near the Pakistan border in June 2003 and involved an independent contractor. The other death occurred at another, unspecified location in Iraq and involved a CIA interrogator, the official said, speaking on the condition of anonymity.

That means that in total, U.S. officials have acknowledged two prisoner deaths they consider to be homicides, and have ongoing investigations into another 12 deaths.

Senior military officials braced for broader investigations. "I expect that as these investigations track down all the possible leads that there will be more things that will need to be looked at very, very carefully," Gen. Peter Pace, vice chairman of the Joint Chiefs of Staff, said Wednesday in an appearance on CBS' "The Early Show."

"As they chase the various elements, more people come forward with bits and pieces they think they might have and that leads you to look at other things," Pace said. "So there will be more investigations. Where that will lead I don't know."

In the first of two planned interviews, the president did not specifically apologize for the mistreatment of prisoners at Abu Ghraib prison near Baghdad.

But, he said, "The actions of these few people do not reflect the hearts of the American people."

Later, White House spokesman Scott McClellan used the word "sorry" a half-dozen times. "The president is sorry for what occurred and the pain it has caused," he said.

As Miller spoke to reporters in cellblock 1A, five women inmates screamed, shouted and waved their arms through the iron bars.

"I've been here five months," one of the women shouted in Arabic. "I don't belong to the resistance. I have children at home."

At a tent camp inside the prison used for detainees with medical conditions, prisoners ran out shouting as the bus of journalists pulled in. Some hobbled out of tents on crutches. A one-legged man hopped out, waving his prosthetic leg in the air.

Asked about claims by many prisoners after their release that they were picked up by mistake and have no connection to the anti-U.S. resistance, Col. Foster Payne, head of military intelligence at Abu Ghraib, said, "Some people are in the wrong place at the wrong time, but clearly everyone is not a farmer."

The military, which had reviewed Iraq prison policies in the fall for an undisclosed reason, launched three probes and two related inquiries after the photographs came to light in January. Six military police face are facing criminal charges as a result of the probes and seven officers have been disciplined administratively.

U.S. officials have said that the abuse of prisoners at Abu Ghraib was an aberration. Joint Chiefs vice chairman Gen. Peter Pace told the CBS News Early Show, "Those soldiers were not following orders."

But Iraqis freed from coalition jails are stepping forward with new allegations.

An Iraqi human rights group, the Human Rights Organization in Iraq, claimed interrogation methods allegedly include jolts from cattle prods or stun guns. Beatings during arrest and interrogation were said to be routine.

On Tuesday, the U.S. military said it was ordering troops to use blindfolds instead of hoods, and requiring interrogators to get permission before depriving inmates of sleep — one of the most common techniques reported by freed Iraqis.