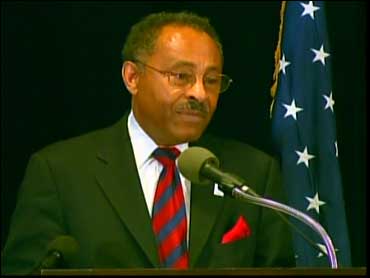 Roland Burris says he's "humbled and honored" to be Illinois' next junior senator, and is thankful for the opportunity to serve.

The former Illinois attorney general thanked Senate Majority Leader Harry Reid and Sen. Dick Durbin of Illinois at a news conference Monday and said their scrutiny was motivated by trying to do the best thing for the chamber.

The impasse has served as a distraction for Democrats trying to tackle an ambitious agenda.

"He is now the senator-designate from Illinois and, as such, will be accorded all the rights and privileges of a senator-elect," Senate Majority Leader Harry Reid and Sen. Dick Durbin of Illinois said in a joint statement.

The two senators said they anticipate that Burris, a former Illinois attorney general appointed to the post by embattled Gov. Rod Blagojevich, will be seated this week barring objections from Republicans.

"I'm thankful for the opportunity to serve," Burris said later at a press conference. "It will be my honor to serve with them and to learn from them," he said of Sens. Reid and Durbin.

The senators made the announcement after Burris lawyers delivered to the Capitol documents certifying his appointment to Obama's seat, and the secretary of the Senate determined that the paperwork met Senate requirements.

Burris, in Chicago while his lawyers met with Senate officials on Capitol Hill, scheduled a news conference later Monday.

While a victory for Burris, the move is a major reversal for Senate Democrats.

They initially objected to the appointment by Blagojevich, who is accused by federal investigators of seeking to trade the Senate seat for personal favors. Senators feared that any appointee would be tainted.

Even though Burris does not stand accused of wrongdoing, Senate Democrats rejected Burris last week only to quickly backpedal after Obama himself privately weighed in and senators fretted that the situation was diverting their focus at a critical time.

Indeed, much to the chagrin of Democrats who expanded their House and Senate majorities in the November elections and won the White House, the impasse stretched into the new Congress' second week in session and has served as a distraction for Democrats trying to tackle an ambitious agenda.

As the Burris appointment took on the feeling of a political sideshow, Senate Democratic objections to seating Burris softened. And, Reid said the Senate would vote on Burris' appointment after Senate lawyers reviewed necessary documents and Burris' testimony in the Illinois House that he promised Blagojevich nothing in exchange for the seat.

The Illinois Supreme Court ruled last week that under state law, Burris' appointment paperwork was valid and that it was up to the Senate to decide whether to seat him. But Reid and other Democrats had contended that it violated Senate rules unless the appointment was signed by both the governor and the Illinois secretary of state.

Lawyers for Burris and the Senate met for under an hour in the Capitol to review the documents and determine the next steps.

In their statement, Reid and Durbin said they had spoken with Burris to tell him they were satisfied both with the documents and with Burris' testimony before the impeachment panel that he did nothing wrong.

A date and time for Burris' swearing in has not been set.

Illinois Republican Party Chairman Andy McKenna quickly released a statement criticizing Democrats for not keeping Blagojevich from making an appointment. Illinois Republicans pushed for a special election to fill Mr. Obama's seat in the wake of the Blagojevich scandal; had one been called, the seat might have ended up in Republican hands.

"By failing to strip Rod Blagojevich of his senate appointment power, Democrats chose to trust a madman over the people of Illinois," said McKenna.