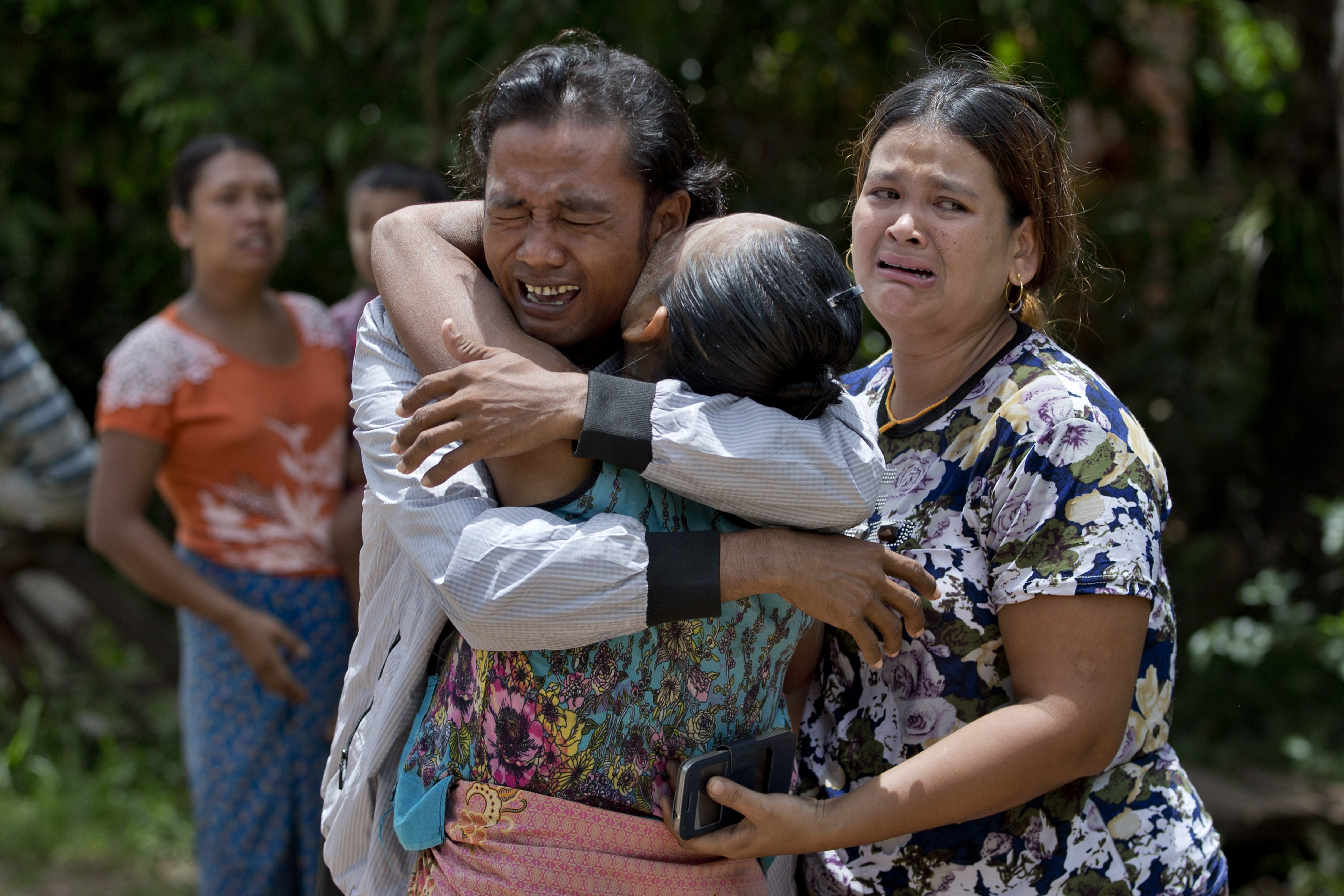 TUAL, Indonesia -- All he did was ask to go home.

The last time the Burmese slave made the same request, he was beaten almost to death. But after being gone eight years and forced to work on a boat in faraway Indonesia, Myint Naing was willing to risk everything to see his mother again.

So he threw himself on the ground and begged for freedom. Instead, the captain vowed to kill him for trying to jump ship, and chained him for three days without food or water.

He was afraid he would disappear. And that his mother would have no idea where to look.

Myint is one of more than 800 current and former slaves rescued or repatriated after a year-long Associated Press investigation into pervasive labor abuses in Southeast Asia's fishing industry.

Thailand's booming seafood business alone runs on an estimated 200,000 migrant workers, many of them forced onto boats after being tricked, kidnapped or sold. It's a brutal trade that has operated for decades, with companies relying on slaves to supply fish to the United States, Europe and Japan -- on dinner tables and in cat food bowls.

Myint, his family and his friends recounted his story to AP, which also followed parts of his journey. It is strikingly similar to accounts given by many of the more than 330 current and former slaves from Burma, Cambodia, Laos and Thailand interviewed in person or in writing by AP.

In 1993, a broker visited Myint's village in southern Burma with promises of jobs for young men in Thailand. Myint was only 18 years old, with no travel experience, but his family was desperate for money. So his mother finally relented. When the agent returned, he hustled his new recruits to grab their bags immediately.

Myint's mother wasn't home. He never got to say goodbye.

A month later, Myint found himself at sea. After 15 days, his boat finally docked on the remote Indonesian island of Tual, surrounded by one of the world's richest fishing grounds. The Thai captain shouted that everyone on board now belonged to him: "You Burmese are never going home. You were sold, and no one is ever coming to rescue you."

Myint spent weeks at a time on the open ocean, living only on rice and the parts of the catch no one else would eat. As Thailand's seafood export industry has expanded, overfishing has forced trawlers farther into foreign waters. So migrants are now trapped for months, or even years, aboard floating prisons.

During the busiest times, the men worked up to 24 hours a day. There was no medicine, and they were forced to drink boiled sea water. Anyone who took a break or fell ill was hit by the captain. Fishermen said that workers on some boats were killed if they slowed down, while others simply flung themselves overboard.

Myint was paid only $10 a month, and sometimes not at all. By 1996, after three years, he had had enough: He asked for the first time to go home.

His request was answered by a helmet cracking his skull.

He ran away. An Indonesian family took mercy on Myint until he healed, and then offered him food and shelter for work on their farm. For five years, he lived this simple life. But he couldn't forget his relatives in Burma, also known as Myanmar, or the friends he left behind on the boat.

In 2001, he heard one captain was offering to take fishermen back home if they agreed to work. So, eight years after he first arrived in Indonesia, he returned to the sea.

But the conditions were just as appalling as the first time, and the money still didn't come. If anything, the slave trade was getting worse. To meet growing demand, brokers sometimes even drugged and kidnapped migrant workers to get them on board.

After nine months on the water, Myint's captain told the crew he was abandoning them to go back to Thailand alone. Furious and desperate, the Burmese slave once again pleaded to go home. That, he said, was when he was chained to the boat.

Searching desperately, he found a small piece of metal to pick the lock. Hours later, he heard a click. The shackles slid off. He dove into the black water after midnight and swam to shore.

Myint hid alone in the jungle in Tual. He couldn't go to the police, afraid they might hand him over to the captains. He had no numbers to call home, and he was scared to contact the Myanmar embassy because it would expose him as an illegal migrant.

He had lost nearly a decade to slavery, and had suffered what appeared to be a stroke, leaving his right arm partly paralyzed. He started to believe the captain had been right: There really was no escape.

By now, he had forgotten what his mother looked like and knew his little sister would be all grown up.

In 2011, the solitude had become too much. Myint moved to the island of Dobo, where he heard there was a small community of former Burmese slaves. He continued to live quietly, surviving on the vegetables he grew.

Then one day in April, a friend told him an AP report on slavery had spurred the Indonesian government to start rescuing current and former slaves. Officials came to Dobo and took Myint back to Tual - the island where he was once enslaved - to join hundreds of other free men.

After 22 years in Indonesia, Myint was finally going home. But what, he wondered, would he find?

The flight to Myanmar's biggest city, Yangon, was a terrifying first. Myint, now 40, was a stranger to his own country.

Making his way to his small village, he spotted a plump Burmese woman.

They exploded into an embrace, and the tears that spilled were of joy and mourning for all the lost time apart. "Brother, it's so good that you are back!" his little sister sobbed. "We don't need money! We just need family!"

Minutes later, he saw his mother, running toward him.

He howled and fell to the ground. She swept him up in her arms and softly stroked his head, cradling him as he let everything go.

He was finally free to see the face from his dreams. He would never forget it again.

EDITOR'S NOTE - Myint Naing's story comes from interviews with him, his family, his friends and other former slaves, and through following his journey to his home in Myanmar. He's among hundreds rescued and returned to their families after a year-long AP investigation exposed extreme labor abuses in Southeast Asia's seafood industry. Reporters documented how slave-caught fish was shipped from Indonesia to Thailand. It can then be exported to the United States and cloud the supply chains of supermarkets and distributors, including Wal-Mart, Sysco and Kroger, and pet food brands, such as Fancy Feast, Meow Mix and Iams. The companies have all said they strongly condemn labor abuse and are taking steps to prevent it.