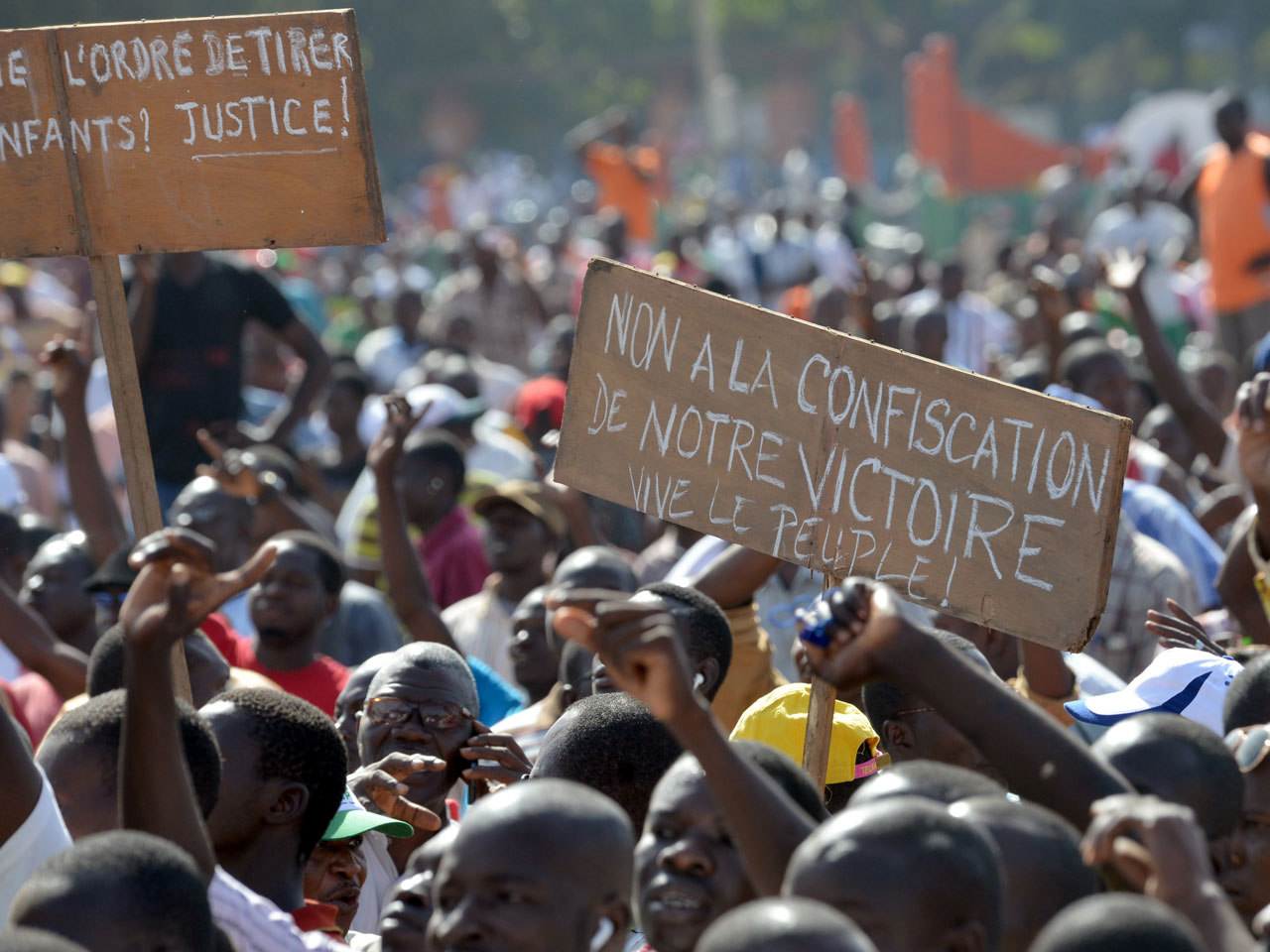 OUAGADOUGOU, Burkina Faso - Burkina Faso's army appointed a military colonel as transitional leader on Saturday, it said, after the West African country's president resigned from 27 years in office amid violent protests against his continued power.

Lt. Col. Isaac Yacouba Zida was unanimously appointed by the army to lead Burkina Faso, the army said in a declaration. "The period of transition" and its "form and duration will be determined later," said the declaration that was drafted and signed after senior officers met with the joint chief of staff Saturday.

After the announcement, thousands gathered on Sunday in the center of Burkina Faso's capital to denounce what they called a military coup, Reuters reports.

"They are coming from Kossyam to enslave us," said protestor Sanou Eric, in a reference to the Presidential Palace. "This is a coup d'etat. Zida has come out of nowhere."

Blaise Compaore resigned Friday after protesters stormed parliament and set the building ablaze following two days of violent demonstrations against his bid to amend the constitution to stand next year for another term. His move left the impoverished West African country in a state of uncertainty, and both Joint Chief of Staff Gen. Honore Traore and Zida had made remarks that they were in power.

Compaore, his family and those close to him had been taken in by Ivory Coast, according to a statement from the office of President Alassane Ouattara. It did not elaborate. It said Ouattara was following events "with particular attention."

A graduate of Muammar Qaddafi's World Revolutionary Center (a.k.a. Harvard for tyrants,) Campaore took power in a coup after a hit squad gunned down his former military comrade predecessor, Thomas Sankara, in his office in 1987. He has won four mostly questionable elections since then, and he has largely maintained power and public support by playing the "It's either me or chaos" card.

Earlier Saturday, Zida said that the president's resignation amid violent street protests was an "insurrection" and not a coup, and that Compaore and a top aide were both safe.

"Starting today I will assume all the responsibilities of this transition and of head of state," he said in an announcement carried on radio early Saturday.

Zida was the second in command of the president's security regiment. Having been in Burkina Faso's ranks for more than two decades, Zida is close to the president and appreciated by lower ranking soldier.

Zida called on the international community including the African Union to "support our people during this difficult ordeal." He had announced that the country's borders had been closed, a transitional committee had been set up and the constitution had been suspended.

Gen. Traore, the joint chief of staff, had on Friday told reporters that he would assume the presidency until elections were called, so Lt. Col. Zida's declaration Saturday caused initial confusion.

Over the course of several dramatic hours, Compaore, 63, went from looking likely to jam through parliament a bill that would let him seek a fifth term to agreeing to step down next year to abandoning office immediately.

The quick succession of events took many by surprise, since Compaore had long out-maneuvered his adversaries and has in recent years become an important regional mediator. Burkina Faso hosts French special forces and serves as an important ally of both France and the United States in the fight against Islamic militants in West Africa.

The United States called on Burkina Faso's military "to immediately transfer power to civilian authorities" in order "to move immediately towards free and fair presidential elections.

"The United States condemns the Burkinabe military's attempt to impose its will on the people of Burkina Faso," State Department spokeswoman Jen Psaki said in a statement released Saturday.

Compaore first came to power following the October 1987 coup against then-President Thomas Sankara, Compaore's longtime friend and political ally who was killed in the power grab.

While he was respected on the international stage, critics noted that, under Compaore's semi-authoritarian rule, the country of 18 million people remained mired in poverty. The landlocked country's fortunes rise and fall with gold and cotton prices - and adequate rain in a region plagued by drought.