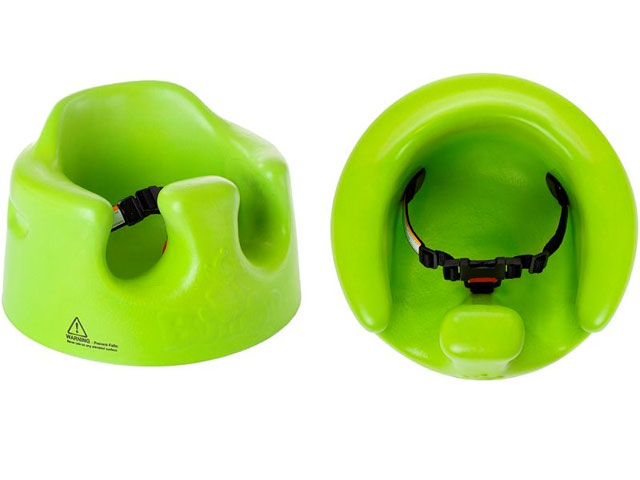 (CBS News) Bumbo International Trust is recalling four million of its popular baby seats after at least 50 reports of infants falling from seats placed on elevated surfaces, the U.S. Consumer Product Safety Commission (CPSC) announced Wednesday. Nineteen of the reports included skull fractures suffered by infants, prompting the company and government agency to urge parents to stop using the product until they obtain a repair kit.

The products are sold in the U.S. at Sears, Target, Toys R Us (including Babies R Us), USA Babies, Walmart, and various other online sellers and toy and children's stores nationwide. Recalled products were sold between August 2003 through August 2012 for between $30 and $50.

The consumer safety agency said the injuries occurred when babies fell from a Bumbo seat while it was placed on an elevated surface, which the seats labels had warned against. Falling risk first lead to a voluntary recall of one million of the seats in October 2007 to provide additional warnings about falling risk.

According to a CPSC blog, infants can escape the Bumbo seat by arching their backs, rocking, or leaning forward or sideways. Infants between 3 and 10 months old have suffered serious head injuries like concussions or skull fractures when this happens, according to the blog.

CPSC and Bumbo are also aware of an additional 34 post-recall reports of infants who fell out or maneuvered out of a Bumbo seat used on the floor or at an unknown elevation, resulting in injury. Two of these reported cases included skull fractures, while others included bumps, bruises and other minor injuries.

People who own a Bumbo seat should stop using it immediately until they order a free repair kit that contains a restraint belt that should always be used when a child is in the seat. The kit also contains new warning labels that should be placed on the product.

"Even with the belt, the seat should never be used on any raised surface," the CPSC urged consumers.

Consumers should not attempt to take the products back to retailers since they can't provide the repair kit. They can order the free kit from Bumbo's website or can call the company at 866-898-4999 between 8 a.m. and 5 p.m. CT Monday through Thursday and between 8 a.m. and 12:30 p.m. CT on Friday.