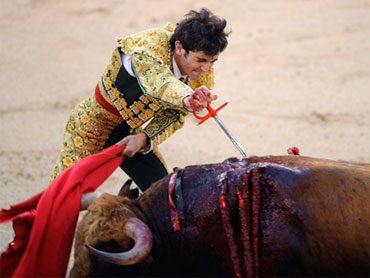 Lawmakers in Catalonia outlawed bullfighting Wednesday, making this Spain's first major region to do so after an impassioned debate that pitted the rights of animals against preserving a pillar of traditional culture.

Cheers broke out in the local 135-seat legislature after the speaker announced the ban had passed 68-to-55 with nine abstentions. The ban in the northeastern coastal region whose capital is Barcelona will take effect in 2012.

Catalonia is a powerful, wealthy region with its own language and culture and a large degree of self-rule. Many in Spain have seen the pressure here for a bullfighting ban as a further bid by Catalonia to stand out from the rest of the country.

The practical effect of the ban will be limited: Catalonia has only one functioning bullring, in Barcelona, while another disused one is being turned into a shopping mall. It stages 15 fights a year which are rarely sold out, out of a nationwide total of roughly 1,000 bouts per season.

But Joan Puigcercos, a lawmaker from a Catalan pro-independence party, insisted this was not about politics or national identity but rather "the suffering of the animal. That is the question, nothing more."

The result will energize animal rights groups bent on seeking bans in other regions of Spain.

"Today has been the day we were hoping for," said Leonardo Anselmi on behalf of PROU, the animal rights groups whose signature-collecting campaign late last year forced Catalonia's Parliament to debate and vote.

"The suffering of animals in the Catalan bullrings has been abolished once and for all. It has created a precedent we hope will be replicated by other democratic Parliaments internationally, in those regions and countries where such cruel bullfights are still allowed." Bullfighting is also popular in Mexico, parts of South America, southern France and Portugal.

The center-right Popular Party, which is fervent about the idea of Spain as a unified country run from Madrid - and also supports bullfighting - said it will fight back against the ban here.

It will press both chambers of the Spanish Parliament to pass a law giving bullfighting a protected status that will bar regions from outlawing it, said Alicia Sanchez-Camacho, president of the party's Catalan branch.

In the Madrid region, animal rights activists recently presented more than 50,000 signatures as part of a petition to force a similar debate and vote. However, there they face a tougher battle because the Madrid regional parliament is controlled by conservatives who responded to the growing anti-bullfighting momentum in Catalonia by declaring Spain's 'fiesta nacional' to be part of Madrid's cultural heritage.

The first Spanish region to outlaw bullfighting was the Canary Islands, in 1991. But fights were never that popular there and when the ban took effect there had not been a bullfight for seven years. That makes the Catalonia vote a much more potent case, even if bullfighting is not as popular there as it is in Madrid or down south in Andalusia.

As debate got under way in Barcelona, protesters from both camps rallied outside the parliament building.

Pro-bullfighting groups carried signs painted on the red and yellow Catalan flag, with slogans such as Libertad y Toros (Freedom and Bulls).

The two groups traded taunts and heckled each other.