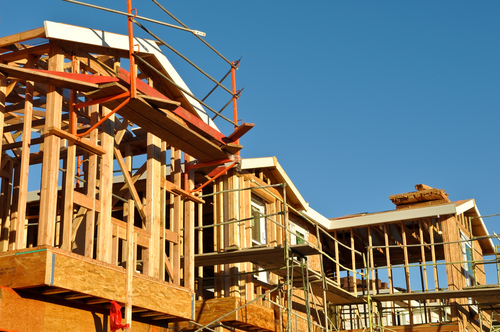 Home builders are confident the market is picking up for new single-family homes, despite reports of increasing mortgage delinquencies and decreasing mortgage applications. Builder confidence increased for the fifth consecutive month in February, according to the National Association of Home Builders (NAHB)/Wells Fargo Housing Market Index (HMI) released Wednesday.

Positive builder sentiment increased to 29, up from 25 in January. A score of 50 or more indicates more builders view conditions as "good" rather than "poor."

Barry Rutenberg, the chairman of the NAHB and a home builder in Gainsville, Fla., said in the release: "Given the recent improvements in new home starts and the increasing number of markets included in the NAHB/First American Improving Markets Index, this consistency suggests that the housing market is moving towards sustainable growth."

Rutenberg cautioned policymakers against taking any actions which could "impede or even reverse the gains of recent months."

NAHB Chief Economist David Crowe is cautiously optimistic, noting in the press release the confidence score of 29 is far from ideal: "This is the longest period of sustained improvement we have seen in the HMI since 2007, which is encouraging. However, it is important to remember that the HMI is still very low, and several factors continue to constrain the market."

"Foreclosures are still competing with new home sales," Crowe wrote, "and many builders are seeing appraisals come in at less than the cost of construction. Additionally, prospective homebuyers are finding it difficult to qualify for a mortgage."

Become a better borrower with your credit score

"To see that, quarter over quarter, fewer homeowners were able to make their mortgage payments is not welcome news. However, it was not unexpected. First, there tends to be a natural seasonality, evident well before the recession, of higher delinquencies in the fourth quarter; perhaps explained by borrowers balancing holiday spending vs. debt payments. Secondly, on the economic front, house prices continued to deteriorate in the fourth quarter and unemployment remains stubbornly high. This combination leads to more negative equity in homes and reduced real personal income that can affect borrowers' ability and willingness to pay their mortgages."

"The more encouraging news is that, when looking year over year, more homeowners are making their mortgage payment and the delinquency rate dropped over 6 percent since Q4 2010," Martin noted. "While it is certainly good to see the rate dropping, at this pace it will take a very long time for mortgage delinquency rates to get back to normal."

Despite the confidence homebuilders have in the new home sales market going forward, it's clear we aren't out of the woods yet. Consumers need jobs before they can buy homes, and until the job market picks up, I believe we'll continue to see a slow housing market recovery.