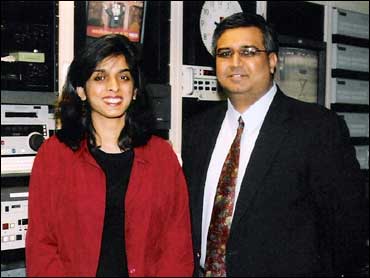 The crime drips with brutal irony: a woman decapitated, allegedly by her estranged husband, in the offices of the television network the couple founded with the hope of countering Muslim stereotypes.

Muzzammil "Mo" Hassan is accused of beheading his wife last week, days after she filed for divorce. Authorities have not discussed the role religion or culture might have played, but the slaying gave rise to speculation that it was the sort of "honor killing" more common in countries half a world away, including the couple's native Pakistan.

Funeral services for Aasiya Hassan, 37, were Tuesday. Her 44-year-old husband is scheduled to appear for a felony hearing Wednesday.

Asma Firfirey, Aasiya's 42-year-old sister who lives in South Africa, has told the News 24 network in that country that she was on the phone with the New York woman during the brutal encounter. (Click here to read the News 24 report.)

Firfirey told News 24 said she and her husband were talking to Aasiya last Thursday when they heard her tell her husband to calm down, asking him if they could talk the following day about the divorce.

Then Firfirey said she heard sounds that made her think her sister was struggling to breathe. They were informed Friday that Aasiya had died.

"I can only imagine how scared and emotional she must have been before she died," she told the network.

The Hassans lived in Orchard Park - a well-off Buffalo suburb that hadn't seen a homicide since 1986 - and started Bridges TV there in 2004 with the message of developing understanding between North America and the Middle East and South Asia. The network, available across the U.S. and Canada, was believed to be the first English-language cable station aimed at the rapidly growing Muslim demographic.

Orchard Park Police Chief Andrew Benz said his officers had responded to domestic incidents involving the couple, most recently Feb. 6, the day Mo Hassan was served with the divorce papers and an order of protection.

"I've never heard him raise his voice," said Paul Moskal, who became friendly with the couple while he was chief counsel for the FBI in Buffalo. Moskal would answer questions in forums aired on Bridges TV that were intended to improve understanding between Muslim-Americans and law enforcement.

"His personal life kind of betrayed what he tried to portray publicly," Moskal said.

On Feb. 12, Hassan went to a police station and told officers his wife was dead at the TV studio.

"We found her laying in the hallway the offices were off of," Benz said. Aasiya Hassan's head was near her body.

"I don't know if (the method of death) does mean anything," said the chief, who would not discuss what weapon may have been used. "We certainly want to investigate anything that has any kind of merit. It's not a normal thing you would see."

Hassan was not represented by an attorney at an initial appearance on a charge of second-degree murder. Neither police nor the Erie County district attorney's office knew if he had hired a lawyer.

The New York president of the National Organization for Women, Marcia Pappas, condemned prosecutors for referring to the death as an apparent case of domestic violence.

"This was, apparently, a terroristic version of 'honor killing,"' a statement from NOW said.

Nadia Shahram, who teaches family law and Islam at the University at Buffalo Law School, explained honor killing as a practice still accepted among fanatical Muslim men who feel betrayed by their wives.

"If a woman breaks the law which the husband or father has placed for the wife or daughter, honor killing has been justified," said Shahram, who was a regular panelist on a law show produced by Bridges TV. "It happens all the time. It's been practiced in countries such as Pakistan and in India."

Acquaintances said Mo Hassan was not overtly religious - co-workers did not see him pray, for instance. But he seemed to adhere to many traditional practices.

Nancy Sanders, the television station's news director for 2 1/2 years, remembers him asking her to move her feet during her job interview so he would not see her legs. She was wearing a skirt and stockings.

He also would not let women enter his office unless his wife was there, and he blocked the station from airing a story about the first Muslim woman to win the title of Miss England in 2005, Sanders said.

Acquaintances said Aasiya Hassan was trained as an architect. Sanders described her as obedient to her husband, and that she wore a traditional hijab for a time but later stopped without explanation.

"She was beautiful, small, delicately built," she said, "while Mo would fill up a door frame. I always thought of him as a gentle giant."

Sanders, who left Bridges TV a year ago, said co-workers traded stories about Hassan's apparent violent streak, including one which had him running his wife's car off the road while the couple's two young children were inside. Aasiya herself never spoke of it, she said.

"I just do not feel it was an honor killing," Sanders added. "I think it was domestic abuse that got out of control."

Erie County District Attorney Frank Sedita did not immediately respond to The Associated Press' request for a copy of the order of protection issued against Mo Hassan. Divorce records are sealed in New York state. Aasiya Hassan's lawyer would not reveal the reasons for the divorce filing.

Hassan graduated with an MBA from the Simon School of Business at the University of Rochester in 1996, according to the TV station's Web site. Bridges broadcasts all over the United States and in Canada on various cable providers and Verizon FiOS. As of 6 p.m. Tuesday, the network was not broadcasting in the Buffalo area.

There was no answer at the network on Tuesday and it's Web site has a message saying Bridges is shocked and saddened and requests privacy.